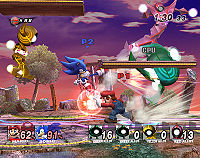 Sonic and Mario fighting a team of Alloys in Co-op.

Alloys are shiny, robot-like figures with cavities where their faces would otherwise be, and white spheres attached to their limbs and within their facial cavities. There are four types of Alloys, each with its own body shape, color, and cloned moveset:

While the Fighting Alloys possess the animations and standard attacks of playable characters, they are not able to use any special moves. They also cannot shield or use any dodges. They can grab and be grabbed by players, but cannot grab and hang from edges like playable characters. They cannot taunt and they cannot tech. They cannot pick up or hold items, but they can interact with most items that do not require picking up. For example, they may hit Soccer Balls and gain invincibility from Starmen, but are not affected by Super or Poison Mushrooms. Alloys cannot be inflicted with the flower ailment. There are no sound effects when using moves.

The Red Alloy trophy is unlocked by defeating five Alloys in Cruel Brawl.

Red Alloy
A member of the Fighting Alloys. This one's sporting a red body. Built like an everyday hero, he fights like one too. Typically, when groups are divided into colors, red tends to serve a leadership role. Although this does not necessarily apply to the Alloys, the Red Alloy somehow feels the need to step it up.

The Blue Alloy trophy is unlocked by clearing 100-Man Brawl with all characters.

Blue Alloy
A beautiful, cobalt blue member of the Alloys. This dainty female-form Alloy relies on a less rough-and-tumble style of fighting. The core at the center of her body provides power for the whole group of Alloys and plays a key role in holding body parts together. However, this is not necessarily a weak point, and attacking this core will not result in greater damage.

The Yellow Allow trophy is unlocked by defeating 100 Alloys in Endless Brawl.

Yellow Alloy
A member of the Alloys who stands out from the bunch with a sharp yellow body and horns. He moves like Mario but is bigger and has a longer reach. He can't, however, use items or special moves. Also remember that he is not controlled by a human player, so this is your big chance--show him who's boss!

The Green Alloy trophy is unlocked by clearing a 15-Minute Brawl.

Green Alloy
The guy who clearly has the biggest head of all the Alloys. In fact, he's all head! When you face him in the 100-Man Brawl, he'll come at you in a group with other Alloys. While kicking around herds of these bad boys can be good fun, the highest-difficulty Brawl challenge is brutal--the Green Alloys will come at you like merciless demons! 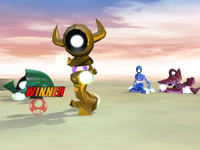 It is possible for human players to play as Fighting Alloys through the use of special hacks. The following applies when fighting as an Alloy:

When using knockback modifiers in Cruel Brawl, it is shown that some Fighting Alloys are given stronger handicaps that make them more resilient to knockback, while also dealing greater knockback to the player.