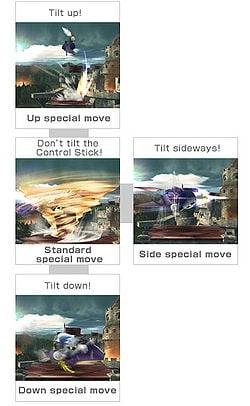 A special move (必殺技 or 必殺ワザ, Sure-Killing Art), also known as a special attack, is any move performed by pressing the special button, the B button by default. Like the name suggests, special moves are unique attacks that can have wildly different functions, unlike "normal" attacks (such as neutral attacks or tilt attacks) which often function as standard punches, kicks, and weapon swings. In many cases, special moves provide more tactical advantages compared to normal attacks and do more damage than smash attacks, although this differs between every special move.

Special attacks are unique to a character's fighting style, and are almost always homages to abilities that the character can use in their home games; for example, Kirby can use his signature Inhale to copy abilities.

In the Smash Bros. series, special moves follow a pattern with their inputs:

Usually, only special attacks can be projectiles (although some fighters gain projectiles in their normal moveset starting from Brawl, such as Snake's and Olimar's smash attacks, and Mega Man and Villager's aerial attacks), and some are able to render the user helpless if used in mid-air (usually those that function as mid-air jumps, like most up special moves).

With the character customization introduced in Super Smash Bros. 4, there are three options for each character's special moves (effectively meaning 12 move options per character). Most custom specials are loosely based on their defaults; usually one variant is faster or grants extra mobility or range, while the other is stronger or provides some form of protection. For example, Mario's up special, Super Jump Punch, can be replaced with either Super Jump or Explosive Punch; the former travels much farther but deals no damage, while the latter travels very little distance but has two powerful hits. The only major exceptions to this are Palutena and the Mii Fighters, whose custom specials are entirely different from their defaults, and the DLC characters, who do not have custom special moves at all. Smash 4 also introduced command-input moves.

In Super Smash Bros. Ultimate, character customization is limited to Mii Fighters, and so only they have access to custom specials. However, some characters have previous custom specials integrated into their default special moveset from the transition from Smash 4 to Ultimate. For example, Palutena’s side special is now Explosive Flame (replacing Reflect Barrier, which has merged with her down special), and her mobility has been significantly buffed to compensate for losing access to Lightweight. Meanwhile, Shulk had his Monado Arts changed to act much like his custom move Hyper Monado Arts, making them even stronger but at the cost of increased downsides, shorter durations, and lengthy recharge times.

to do a special move. You can perform other moves and attacks by tilting