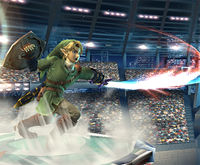 A ground attack performed by Link.

A ground attack is an attack made while the character is standing on the ground, as opposed to aerial attacks, which are performed while the character is airborne. This includes neutral, tilt, dash, and smash attacks. Special moves can be ground attacks as well. Some specials behave differently when performed as ground attacks. An example of this is Link's Spin Attack, which can be charged (starting in Brawl) if performed on the ground. A few special attacks can only be performed on the ground, specifically Donkey Kong's Hand Slap (prior to Super Smash Bros. 4) and Peach's Vegetable; in a similar way, Olimar's Pikmin Pluck can be used in the air, but only has an effect when grounded. Inversely, there are a few hitboxes in the Smash series that can only interact with other characters who are on the ground.