From SmashWiki, the Super Smash Bros. wiki
(Redirected from Smash attacks)
Jump to navigationJump to search 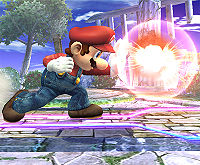 Mario's forward smash in Brawl, in which he sends out a powerful explosion from his hand, which does heavy damage and knockback.

The namesake of the Super Smash Bros. series, a smash attack (スマッシュ攻撃) is a grounded move which is used to deal "finishing blows" to an opponent.

It is performed by "tapping" the control stick and pressing the attack button at the same time. It can also be done by tapping the C-stick in the multi-player modes of Melee, or any mode in Brawl and SSB4. SSB4 also added the ability to charge a smash attack by holding a direction on the control stick and pressing the A and B buttons simultaneously. The three types of smashes are the forward smash, up smash and down smash. Despite the name, smash attacks are not related to Final Smashes.

Smash attacks generally have higher knockback compared to other attacks in a character's arsenal. Uncharged smash attacks typically do around 13% to 24% damage varying on the character used. In every game since Melee, they can be charged by holding the buttons down, giving them more damage and knockback. A smash attack may be charged for up to 60 frames, or 1 second, although charging begins at different times depending on the move. A fully-charged smash attack does 1.3671× damage in Melee and 1.4× damage in Brawl, Smash 4, and Ultimate. For example, a smash attack that normally does 16% damage will do 21.8736% damage when fully charged in Melee, while it will do 22.4% fully charged in Brawl, Smash 4, and Ultimate.

A character receives 1.2× additional knockback when hit while charging a smash attack prior to Ultimate (akin to the counter hit mechanic in other fighting games).

Smash attacks are often powerful finishing moves and/or large attacks, however, they sometimes tend to be laggy: they usually come out slower than a neutral or tilted attacks, and have longer endlag, a prominent example being Palutena's smash attacks, which have notable startup lag and among the highest cooldown. However, there are a few exceptions to this rule, with notable examples being Pikachu's forward smash, Mario's up smash (except in SSB) and Mr. Game & Watch's smash attacks, all of which have low cooldown while only his up smash has noticeably high startup. A character who spams smash attacks is easy to counter in most scenarios and all skill levels of play. As with any attack, the smash attack's power will also be affected with stale-move negation when it is overused. At the same time, frequently spamming via charging them at inappropriate times can also warrant increased knockback as aforementioned, which foes can easily use as an amplified and deadly punish.

Battering items such as the Fan, Lip's Stick, or the Beam Sword have their own forward smash, and can also be charged (except for the Home-Run Bat). Using a smash attack to throw an item often deals more damage than simply tilt-throwing it.

While smash attacks were introduced in the first game, they could not be charged. As such they were slightly less powerful overall than in subsequent games, where they can be charged to KO at lower percentages.

Smash attacks can now be charged, dealing 1.3671× more damage when fully charged. In Versus mode, smashes can also be performed by pressing the C-stick in any direction (in single-player mode the C-stick controls the camera). Holding the Z button or A button while pressing the C-stick results in charging the smash.

Since Brawl, smash attacks' damage multiplier have been rounded from 1.3671× to 1.4x, making them stronger. One can play the game with 4 different controller setups. While the Wii Remote, the Wii Remote and the Nunchuk, GameCube Controller, and the Classic Controller all have control sticks to perform Smash attacks the standard way, when using the Wii Controller on its side, one can also press the direction they are attacking and press both the 1 and 2 buttons at the same time. However, though it is stated in the photo, the 1 button is not required to perform a smash attack. When attacks are charged in Brawl, characters now move while flashing as opposed to just freezing then unleashing the attack since smash attacks now have a separate animation while charging as opposed to looping a single frame from the main smash attack animation. Smash attacks also have a seperate start up animation which will then either transition into the main attack animation or the charging animation. Like in Melee, a small sound can be heard when charging a smash attack. For most characters, it's the same cracking sound from Melee except much less dull, but certain characters such as Yoshi, Kirby, and Pikachu now make a squeaking noise instead.

Mechanically, smash attacks seem virtually unchanged from the previous game; only aesthetic and control differences. One change to Smash attacks is that like in Melee, they have one animation with the move's script calling for a command on a certain frame to determine whether the attack will be charged or not as opposed to having a separate startup animation which then transitions into either the main animation or the charging animation. Smash attacks still have separate charging animations however. This mostly has no impact on gameplay although it does benefit Meta Knight's down smash as since it only has one animation instead of two, the move can be performed one frame faster if buffered. Update 1.0.6 added the ability to charge smash attacks with the A + B buttons.

In Ultimate, smash attacks can still be charged for 1 second. However, they can also be held for an additional 2 seconds after that, not increasing their power any further, but allowing the attack to be held for a more controllable amount of time.

In addition, the game allows the 1.4x full charge damage, the 1 second of charging, and 2 seconds of holding to be set individually per smash per character. Currently, these attributes are only used to weaken certain smashes to having a full charge damage of 1.2x and a hold time of 1 second. These exceptions are:

Additionally, as of version 11.0.0, Min Min can hold her forward smash for only 30 frames, or half a second, a far shorter duration than any other character. However, unlike the aforementioned characters, she does not incur in any charge damage penalty.

It is clear from these exceptions that smashes that use projectiles or long-disjoint props are being balanced with lesser attributes.

at the same time or just tilt

to deliver a smash attack and launch your enemy. The attack will change depending on the direction you flick