In Brawl and Smash 4[edit]

In Brawl and Smash 4, Wario takes a bite of garlic and turns into Wario-Man while laughing. The transformation is somewhat similar to Bowser's. During the Final Smash, all of his moves are upgraded greatly, being extremely fast and strong and having decreased ending lag. All of his throws are able to KO opponents above 70%. Wario-Man's attacks deal more damage and knockback, and he's virtually invincible, which even includes being immune to footstool jumps. However, he can still be affected by Brawl's random tripping, take damage by eating explosive items or going off-screen, and be affected by size changing items, such as the Super Mushroom and Poison Mushroom. Also, Wario-Man is unaffected by Metal Boxes.

All of Wario-Man's aerial attacks, except his down aerial, cause him to gain altitude without entering helpless mode, giving him unlimited recovery. This also means that Wario-Man can easily perform both Hyrule Jumps. However, since his aerials make him gain altitude in a set path, an effective wall of pain is not possible. All of his aerials can be strung together for a rather ridiculous-looking upward movement.

Wario Waft charges faster, and a fully charged Wario Waft from Wario-Man can deal one-hit KOs under normal circumstances, though the half charge one is unaffected. His bike becomes so fast that it can outrun the cars in Big Blue, and must be jumped off almost immediately to avoid self destructing on smaller stages. Additionally, Wario's Corkscrew deals electrokinetic damage to any fighter it hits.

Once the duration of the Final Smash is up, Wario-Man will spin in place while surrounded by a ball of light, causing him to revert back to Wario. Immediately after transforming back, Wario will perform an animation, during which he is briefly intangible. On the ground, Wario will get up and brush dirt off himself, and in the air Wario will spin in place while posing with his mouth open. In Brawl, Wario will make a loud, echoing "Oooooh..." right after transforming back, while he stays silent in Smash 4.

The transformation lasts for 16 seconds in Brawl and 12 seconds in Smash 4.

In Ultimate, the move has Wario charge forward after eating the garlic. If the rush connects, he turns into Wario-Man and unleashes a barrage of attacks accompanied by comical text and effects, ending with a fart that launches the trapped opponents. The Ultimate version of Wario-Man joins all former "transformed moveset" Final Smashes (such as Giga Bowser and Giga Mac) in losing its player-controlled moveset in favor of a quick attack that returns players more promptly to normal gameplay.

Changes from Wario in Brawl[edit]

Besides a few very minor nerfs, Wario-Man outclasses Wario in every single regard and is considered one of the best final smashes in Brawl.

Changes from Brawl to Smash 4[edit]

Wario-Man received a mix of buffs and nerfs from Brawl to Smash 4 but was nerfed overall.

Wario-Man
Wario's Final Smash. He chomps on his favorite food, garlic, and transforms into Wario-Man! His mobility goes way up. His attack power doesn't change much, but he scampers like a cockroach, using moves like crazy! He can jump over buildings and use midair attacks to fly. Oh, and he doesn't flinch from attacks. Think twice about bringing out his motorcycle at this time...

Wario-Man's trophy in Super Smash Bros. for Wii U

With just a little nibble of garlic, humble everyman Wario transforms into the hero of justice, Wario-Man! He's...still not really all that strong, but he does get quite a bit faster, and he can launch foes farther too. And like any good hero, he has the ability to fly...by spamming attacks in midair. Just like they all do it, right?

Just a little nibble of garlic, and the humble Everyman Wario transforms into the hero of justice, Wario-Man! He's...still not really all that strong, but he does get quite a bit faster, and he can launch foes further too. And of course, like any good hero, he has the ability to fly...by spamming attacks in mid-air. That's how they all do it...right?

Wario-Man's Spirit Battle uses a Wario puppet fighter and is fought on the WarioWare, Inc. stage. During the battle, Wario will receive a Sudden Final Smash and his FS Meter will quickly charge, referencing how Wario-Man serves as Wario's Final Smash. 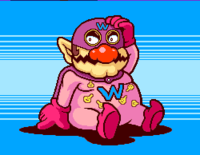 Wario-Man originates from WarioWare: Twisted! and WarioWare: Touched!, appearing as the alter-ego for Wario. In both games, once the player has beaten all of the microgame compilations from the other characters, the player unlocks Wario-Man's microgame compilation. In WarioWare: Twisted, Wario transforms into Wario-Man after falling into Dr. Crygor's invention: the Gravitator, while in WarioWare: Touched! Wario transforms after consuming a rotten piece of garlic, later named mandrake in subsequent WarioWare titles, which inspired the animation of Wario-Man's transformation seen in Smash (minus the fact that he eats a regular head of garlic in Smash, as opposed to a mandrake). This "new character" then appears on the main menu with a brand new set of microgames available to attempt. Wario-Man's games were the last of its kind both times and were more challenging than the preceding games.

Through out multiple scenes in Twisted and Touched, Wario-Man exhibits some kind of superhuman abilities, such as the ability to fly, as well as having him say he is stronger and more resistant than before; however, most of his powers in Smash are more likely derived from typical superhero/super-villain powers in general comic books and other media. In addition, the stylized graphics seen in the version of his Final Smash in Ultimate are also derived from these kinds of media.