Byleth (male: ベレト; female: ベレス, Byleth) is a character from the Fire Emblem series. As the playable avatar in Fire Emblem: Three Houses, Byleth's name, gender, birthday and dialogue options can be customized. Unlike fellow Fire Emblem avatars Robin and Corrin, however, Byleth has a set appearance and set voice actors, with the majority of their dialogue being from battle quotes instead of interactions with other characters.

Byleth is also the main protagonist of Three Houses, and assumes the role of a professor to one of the three titular houses at Garreg Mach Monastery in order to guide the students through day-to-day activities and help them improve their combat skills.

In Three Houses, Byleth Eisner is the child of Jeralt Eisner, a former knight of the Church of Seiros, and Sitri, a nun of the Church of Seiros. Born in Imperial Year 1159, Byleth was in critical condition during birth until Archbishop Rhea took the Crest Stone of Flames from Sitri and implanted it into Byleth in order to save the newborn. Unbeknownst to Jeralt, Rhea also did this in order to try and reawaken the goddess Sothis. Although Byleth survives, this comes at the cost of Sitri's life and Byleth demonstrating abnormally minimal emotion as a child, as well as a complete lack of a heartbeat that seemingly has no effect on their health. Byleth does not recall much of their past, and Jeralt has told them very little of their childhood.

However, following a chance encounter where Byleth and Jeralt rescue Edelgard von Hresvelg, Dimitri Alexandre Blaiddyd, and Claude von Riegan from a group of bandits, they are brought back to Garreg Mach Monastery. Upon arriving, Jeralt is reinstated as the captain of the Knights of Seiros, and Byleth is enlisted as a professor for one of the Officers' Academy's three houses: the Black Eagles led by Edelgard, the Blue Lions led by Dimitri, and the Golden Deer led by Claude. Depending on the player's decision, the story plays out differently in part 2.

Sothis is a mysterious entity who appears in Byleth's dreams, and eventually manifests in real life, although Byleth is the only one that can see her. She has lost all of her memories except her name, but possesses significant power and demonstrates this by granting Byleth access to the Divine Pulse, an ability that allows Byleth to turn back time. Eventually, after Byleth is banished to a dark realm by a mysterious group called "those who slither in the dark", Sothis learns that she is a goddess upon rediscovering her past. She subsequently fuses with Byleth, thus granting them all of her power at the cost of ceasing to appear to them after that point, except in a few select circumstances. Sothis is also the source of Byleth's Crest, the Crest of Flames, which allows them to wield the Sword of the Creator effectively.

Regardless of which house they choose, at the end of Byleth's first year as a professor, Edelgard declares war on the Church of Seiros and Byleth is forced to take a side. An accident results in them falling into a coma for five years; once they awaken, they reunite with their house of choice (or the Church of Seiros, should they decide to side against Edelgard after choosing the Black Eagles) and assist their house leader in their goals: Edelgard in Crimson Flower to destroy the Church, Dimitri in Azure Moon to stop Edelgard, Claude in Verdant Wind to discover the truth behind the Crests and the Heroes' Relics, and The Church of Seiros in Silver Snow to stop Edelgard and Those Who Slither in the Dark.

What happens to Byleth depends on the route: in Silver Snow and Verdant Wind, they become the new leader of the United Kingdom of Fódlan; in Crimson Flower, Byleth devotes the rest of their life to ending Those Who Slither in the Dark and becomes a lifelong confidant to Edelgard; and in Azure Moon, Byleth becomes Archbishop after Rhea retires.

Fire Emblem Warriors: Three Hopes offers an alternate timeline where Byleth never becomes an academy teacher. While with Jeralt's mercenaries, they are ambushed by another group of mercenaries containing the new protagonist Shez. Byleth handily wipes out the other mercenaries and is about to slay Shez in battle before Shez suddenly reawakens with newfound power. The fight ends in a draw as Byleth claims to have a successful mission and leaves, after which Shez swears to get revenge against Byleth. This alternate series of events results in Byleth never meeting the students of the Officers' Academy and remaining a mercenary. Depending on choices the player makes in the game, Byleth either joins forces with Shez, sacrifices themselves to Sothis out of revenge over Shez killing Jeralt, or confronts Shez directly in a battle that leads to one of them being slain as a result.

Both versions of Byleth also appear as units the player can recruit in the crossover game Fire Emblem Heroes. Most recently, Fire Emblem Engage features male Byleth as one of the game's numerous Emblems, ethereal clones of protagonists from various other Fire Emblem games who dwell within special rings. 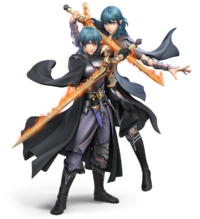 Male and female Byleth, as they appear in Super Smash Bros. Ultimate.

Byleth appears as a newcomer in Super Smash Bros. Ultimate, with his inclusion being announced during a Mr. Sakurai Presents presentation on January 16, 2020.[1] He is the fifth and final DLC character of Fighters Pass Vol. 1, and was released on January 28, 2020.[1] Like his fellow Fire Emblem avatars Robin and Corrin, Byleth's female counterpart is also playable as an alternate costume character.

Super Smash Bros. creator Masahiro Sakurai played an early version of Fire Emblem: Three Houses in order to gain a better experience of how to develop Byleth for Ultimate.[1][2] Sakurai further elaborated that he did this to also ensure that Byleth's release was not delayed, and mentioned that he used this developmental process previously, in which he listed The Legend of Zelda: Breath of the Wild as an example.[1]

In a subsequent interview with Famitsu on February 5, 2020, Sakurai stated that he agreed with fan criticisms regarding the amount of both sword-wielding characters and Fire Emblem fighters in Ultimate. However, he reiterated that he was proceeding with a plan created for him by Nintendo and not picking his own favorites to be added to the roster.[2]

Sakurai said that freshness was the theme of Byleth's inclusion, as Three Houses was released only seven months after Ultimate. Due to Sakurai's aforementioned agreement with the criticism, he sought to have Byleth's moveset reference the branching storylines of Three Houses. As a result, he decided that Byleth would not only retain the Sword of the Creator, but also wield the house leaders' signature regalia: Aymr, Areadbhar, and Failnaught.[2]