Sephiroth (セフィロス, Sephiroth) is the main antagonist of Final Fantasy VII, its high-definition remake, and other related media. The archenemy of Cloud Strife, Sephiroth has become Square Enix's most iconic villain from the Final Fantasy series.

Sephiroth was born as part of a series of experiments led by Shinra known as the Jenova Project. The project made use of the cells of the extraterrestrial being known as Jenova, mistaking her for a member of the humanoid race known as the Cetra. Jenova's cell samples were injected into the fetuses of participating women working alongside the scientists, Gillian Hewley and Lucrecia Crescent. The project birthed three powerful swordsmen, with Gillian's contribution being that of Angeal Hewley and Genesis Rhapsodos, while Lucrecia was forced to participate thanks to Professor Hojo, giving birth to Sephiroth.

Sephiroth became an exceptional member of Shinra's military branch SOLDIER, taking part in a war with the nation of Wutai and being hailed as a hero. Sephiroth also took up missions alongside Angeal's pupil, Zack Fair, most notably in a campaign to hunt down a now renegade Genesis and his "father" Professor Hollander. During the campaign, Angeal was killed by Zack out of mercy for his friend and mentor.

A year later, Sephiroth and Zack were sent to check up on one of the Mako Reactors in Nibelheim, with a young Cloud working alongside them as a Shinra guard. However, the mission to Nibelheim led Sephiroth to learn the truth of his origin, which forever changed the lives of all involved. Zack attempted to get answers as to what Sephiroth was doing, to which he responded only with "I'm going to see my mother..." In his wake to the reactor, Sephiroth set the entire town on fire, which caused the deaths of Cloud's mother and Tifa's father. Zack chases after Sephiroth and catches him standing in the flames with his back turned. Upon entry into the reactor's innermost chambers, Sephiroth finally made contact with Jenova. However, he was stabbed in the back by Cloud with Zack's Buster Sword, impaling him from behind through the abdomen. The severely wounded Sephiroth decapitated Jenova and stumbled across the room, and is again attacked by Cloud. Sephiroth stabbed him with his Masamune, but Cloud used it as a lever to hurl Sephiroth into a pool of mako below the reactor. Sephiroth vanished with Jenova's head still in his grasp, apparently falling to his death. This Nibelheim Incident would later be covered up by Shinra, rebuilding the town and planting actors to behave as if nothing had happened.

Five years later, Sephiroth's consciousness resurfaced after he had merged with the Planet's Lifestream, allowing him to control beings made of Jenova cells, including one sent in his form to murder the President of Shinra while Cloud and his party attempted to rescue their friend Aerith. During their adventure, Cloud's group learns of Sephiroth having sealed himself in a crystalline cocoon in the Northern Cave, initiating a reunion of all of Jenova's cells. The last component he needed was that of the Black Materia, which had been transformed into the Temple of the Ancients to keep it safe. While Cloud and his group went after Aerith who went to the Forgotten City to activate the White Materia, Sephiroth appeared and descended upon her while she prayed, killing her by impalement. But her prayers were enough to activate the White Materia, a catalyst to the ultimate White Magic Holy, a counter to the Black Materia's Meteor. The Black Materia ends up in Sephiroth's hands when he broke Cloud's mind by saying that he was a "Sephiroth clone" and that the SOLDIER present at the Nibelheim Incident had been Zack Fair.

Thanks to Tifa, Cloud was able to overcome his shattered mind and proceed to fight Sephiroth in a final battle. After two transformations, Sephiroth's consciousness attacked Cloud's mind where he was finally defeated, though not permanently, as he will always come back as long as Jenova Cells still exist since he can use their shapeshifting powers to craft a new body for himself, and he maintains his sense of self so that the lifestream can never claim him.

Two years later in Advent Children, Sephiroth's remnants appeared upon the Planet's surface as three aspects of his personality; Kadaj, Yazoo, and Loz. Coinciding with their arrival was an outbreak in Geostigma, a disease that began when Cloud defeated Sephiroth back in the Northern Cave. The white-haired men began their mission to resume the "reunion" by kidnapping several children infected with the disease, to use the Jenova cells within them to revive her. Cloud confronts the trio but is outmatched; he is rescued by Vincent, who reveals that Geostigma is a plague caused by Jenova cells.

Kadaj eventually leads an attack on Edge to find the remains of Jenova. The former members of Avalanche reunite to face him, and Cloud manages to cure his Geostigma using Lifestream-infused water flowing in Aerith's old church. Cloud encounters Kadaj and defeats him in the ruins of Midgar, but Kadaj merges with Jenova's remains to resurrect Sephiroth. The two duel once again and Cloud emerges victorious, resulting in Sephiroth fading away while his manifestations die immediately afterwards. Sephiroth's final words to Cloud before fading away were "I will never be a memory..." heavily implying he will return one day.

Sephiroth appears as the main antagonist in Final Fantasy VII Remake, but his role in the story has changed drastically from the original. Sephiroth takes a much more active role earlier in the game, first appearing after Mako Reactor 1 explodes. He pleads with Cloud to abandon Avalanche and to "live to fight for the planet." There are other occasions where Sephiroth says Cloud needs to live, implying that he is important for whatever plan Sephiroth has. He also says that he is Cloud's everything, implying that both need each other to survive.

The main characters encounter several Sephiroth clones that are taken over and attack them, with a notable occurrence being a clone named Marco attacking and almost killing Cloud before Tifa intervenes. Aside from occasional disembodied taunting, Sephiroth reappears in the Shinra VR theater as a trap for the main characters. After the group escaping from the trap and continuing on their main quest, Sephiroth uses Marco to hurt President Shinra in someway before leaving him to hang off the side of Shinra Tower. When the group comes back and sees this, a Sephiroth controlled Marco kills President Shinra and stabs Barret before turning into the boss Jenova Dreamweaver. After the boss is defeated and turns back into Marco, another Sephiroth clone comes to take him away and escapes.

After the group escapes Shinra, Sephiroth himself appears on the Midgar Expressway and explains his plan to "protect the planet and all its creatures." He then slices open a rift and walks through it, challenging Cloud to follow. After defeating the many boss characters in this new abstract world, the group fights Sephiroth himself. After defeating him, he transports Cloud and himself to another dimension he calls the "edge of creation." Sephiroth initially asks Cloud one more time to "defy destiny" with him. Cloud refuses and the two square off in what appears to be the final battle of the original game, but Sephiroth cuts the battle short and says it is too soon. He spares Cloud and transports him back to Midgar with the rest of the group with a cryptic warning that he has "seven seconds till the end". Sephiroth's current whereabouts and master plan are still unknown.

Being both the penultimate and final boss of Final Fantasy VII, he is often seen in spin-offs as Cloud's arch-enemy, a symbol of Cloud's past.

Sephiroth is mentioned in the description of the Omnislash trophy. Cloud's All-Star Mode congratulations screen references Sephiroth's actions in the Nibelheim Incident, where Cloud watches as Palutena walks through flames similar to Sephiroth's iconic scene. In Cloud's reveal trailer, Cloud's defeat of Sephiroth with Omnislash is recreated with Ike standing in for Sephiroth. Ike is also wearing his black alternate costume to further resemble Sephiroth.

Prior to his formal debut as a DLC character (see below), Sephiroth was given two indirect allusions. The first is in the challenge that unlocks Cloud's Advent Children Fighter Spirit by performing a Cross Slash with a fully charged Limit Break, which features Cloud holding a prone Zelda in a body of water (indirectly alluding to Sephiroth's murder of Aerith in Final Fantasy VII). The second is in Mewtwo's Classic Mode "Psychic Control", where Cloud acts as Mewtwo's "ally" in the third round after his defeat in the second, indirectly alluding to Sephiroth's constant manipulations of Cloud in Final Fantasy VII. 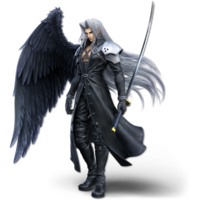 Sephiroth as he appears in Super Smash Bros. Ultimate.

Sephiroth appears as a newcomer in Super Smash Bros. Ultimate, with his inclusion being announced during The Game Awards 2020 on December 10, 2020. He is the third DLC character of Fighters Pass Vol. 2, and was released on December 22nd, 2020.

According to Super Smash Bros. series creator and director Masahiro Sakurai, Sephiroth was designed "to feel like a boss character, with boss-like strength that players can enjoy."[1] This motif was further emphasized with a special limited-time mode called the Sephiroth Challenge, which was released via update 10.0.0 and allowed players the opportunity to unlock Sephiroth and Northern Cave as early as December 17th upon defeating him.