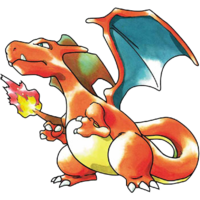 Official artwork of Charizard from Pokémon Red and Green Versions.

Charizard is a dual Fire/Flying-type saurian Pokémon based on dragons,[1] and is categorized within the Pokédex at #006 as the "Flame Pokémon". It is the final evolutionary form of Charmander, after having evolved from Charmeleon at level 36 onward. Despite its design basis, Charizard is not a Dragon-type in its base form. However, it becomes a Fire/Dragon-type upon Mega Evolving into Mega Charizard X; additionally, Super Smash Bros. 4 and Ultimate refer to it and treat it as a dragon on several occasions in spite of its standard typing.

As Charmander, it is one of the Kanto region's three starter Pokémon. However, unlike in Pokémon Red, Green, and Blue, Charmander is obtainable alongside its fellow Kanto starters Bulbasaur and Squirtle under special conditions in Pokémon Yellow Version, and relatively early on in Pokémon X and Y. In Pokémon Sun, Moon, Ultra Sun and Ultra Moon, Charizard appears as a Ride Pokémon that helps the player travel between locations, replacing the Fly Hidden Machine from previous generations (although it is unobtainable without transferring or trading in Sun and Moon).

As Pokédex entries describe, Charizard breathes out fire that reaches incredible temperatures, hot enough to melt boulders and quickly melt glaciers weighing 10,000 tons, and it is said the temperature increases as it experiences harsh battles. When expelling a blast of super hot fire, its tail flame burns more intensely, and if it becomes furious, its tail flame flares up in a whitish-blue color.

Charizard is known to cause forest fires unintentionally. However, a wild Charizard will never turn its fiery breath on any opponent weaker than itself. It flies about in search of powerful opponents, with its wings carrying it close to an altitude of 4,600 feet.

Thanks to being the mascot of Pokémon Red Version and a member of its species having a major role in the Pokémon anime as one of Ash Ketchum's most powerful Pokémon, Charizard is one of the most popular Pokémon in the series. This was reflected in Generation VI, where Charizard gained access to new transformations called Mega Evolutions. Unlike most Pokémon who can also Mega Evolve (besides of Mewtwo), it has two Mega Evolved forms: it becomes Mega Charizard X while holding a Charizardite X, whereas holding a Charizardite Y results in it becoming Mega Charizard Y. In Generation VIII, Charizard (alongside all other Pokémon) no longer has access to Mega Evolutions, but it gains a new form, that being Gigantamax Charizard. During the transformation, it also gains access to the move G-Max Wildfire.

Charizard sports average statistics all around, with relatively high Speed and Special Attack. Its standard ability is Blaze, available to every Fire type starter Pokémon, which increases the power of Fire type attacks when the Pokémon has low HP, while its Hidden Ability is Solar Power, which increases Special Attack under harsh sunlight at the cost of a few HP. Mega Evolution aguments its stats and changes its abilities; Mega Charizard X sports an high Attack statistic and the ability Tough Claws, which increases the power of moves that make contact, while Mega Charizard Y has an impressive Special Attack and the ability Drought, which summons harsh sunlight. These changes significantly improve Charizard's performance in battle.

Many Charizard have appeared in the Pokémon anime, but the most prominently featured one has been Ash's Charizard. This Charizard is well-known for its character arc: having been abandoned by its original trainer as a Charmander, it was adopted by Ash Ketchum. While Charmander started out as a loyal and shy companion, as it evolved into Charmeleon and eventually Charizard, it developed a rebellious and disobedient streak, and only truly bonded with Ash and regained its loyalty when Ash saved its life when it was left out in the cold. Following this, Ash's Charizard would continue being a sporadic but loyal and powerful member of his team.

In other media, Charizard is frequently a signature Pokémon for the various incarnations of Red, as the mascot of Pokémon Red and one of the fully-evolved starter Pokémon of Kanto. In the mainline game series, Red consistently uses Charizard on his teams as an NPC, and Pokémon Origins depicts Charizard as Red's signature Pokémon. This is reflected in the Super Smash Bros. series, where the male playable Pokémon Trainer, himself an incarnation of Red, uses Charizard as his party's only fully-evolved Pokémon. His female counterpart, Leaf, has not used Charizard or any member of its evolutionary line in prior media, making her appearance as the female Pokémon Trainer in Ultimate the first instance of such.

Charizard makes its first appearance in the Super Smash Bros. series as one of the thirteen Poké Ball Pokémon that appear in the original game. When summoned, it uses Flamethrower by rotating its head to the left and right, breathing fire upon any nearby opponents of the player who summoned it, until it disappears. Any character, excluding the summoner, will take damage from the stream of flames, as well as from making contact with Charizard itself. The flames can be reflected by Fox's Reflector, and absorbed by Ness' PSI Magnet. The flames hit consecutively, inflicting approximately 3% per hit, while touching Charizard itself inflicts 18%. 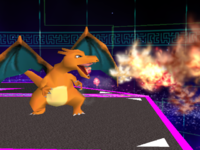 Charizard reprises its role in Melee as a Poké Ball, complete with Flamethrower as its attack. Unlike in SSB, Charizard now uses its 3D model from Pokémon Stadium. Additionally, making contact with Charizard's body now deals 20% and emits a flame effect.

Charizard also appears as a trophy in this game, unlocked as one of the trophies that can be collected randomly throughout the various Single-player Regular Matches.

Charizard
It's hard to believe, but this massive Flame Pokémon evolves from the tiny Charmander. Not only can it fly at heights of over 4,500 feet, but its flaming breath is hot enough to reduce almost anything to ashes in seconds. The flames at the end of a Charizard's tail are said to be a fairly accurate barometer of its power. 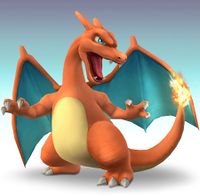 Charizard as it appears in Super Smash Bros. Brawl.

Super Smash Bros. Brawl marks the third appearance of Charizard in the series, and its first as a playable character. It is one of Pokémon Trainer's three Pokémon, alongside Squirtle and Ivysaur. Charizard retains Flamethrower, which is used as its neutral special move and functions almost identically to Bowser's Fire Breath.

Charizard
A Flame Pokémon. Its fiery breath is hot enough to burn up rocks, and its wings let it fly up to 4,600 feet into the air. It's a proud Pokémon that will never use its flame breath on an opponent weaker than itself. The flame on its tail is a barometer of how much vitality it has remaining. Its signature move, Flamethrower, is a reliable technique. 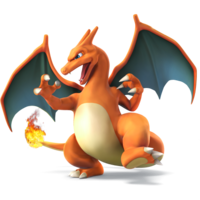 Charizard, as it appears in Super Smash Bros. 4.

Charizard returns in Super Smash Bros. 4 as a playable character. However, in SSB4, Charizard is a standalone character, unlike in Brawl, where it was one of Pokémon Trainer's Pokémon. To reflect this, Pokémon Change has been replaced by a new side special move, Flare Blitz, while Rock Smash has been reassigned to being its down special move. Charizard also has a new Final Smash, which consists of it undergoing Mega Evolution to become Mega Charizard X.

The most beneficial change Charizard received in the transition from Brawl to SSB4 was the removal of stamina, which came about as a result of no longer being tied to Pokémon Trainer. Rock Smash now grants Charizard super armor, increasing its utility. Becoming a standalone character also granted it a new special move in Flare Blitz. In addition to being a very powerful KOing option, it can function as a quick and fairly safe horizontal recovery option. Despite being a super heavyweight, Charizard has above-average walking speed and one of the fastest dashing speeds in the game, which helps with its approach.

However, Charizard has significant issues. SSB4 removed gliding, which considerably worsened Charizard's recovery in the process. Flare Blitz's utility is offset by its recoil damage, as it deals 5% just from being initiated and another 5% upon hitting something, even if it is an opponent's shield. It also results in high ending lag, making it very punishable when used unwisely. When used or aimed off-stage, it has a very high chance of self-destructing itself, due to it traveling a great distance and putting Charizard into temporary free fall, reducing its chances of recovering back to the stage - assuming Charizard is not propelled directly into the blast line.

While originally regarded as one of the worst characters in SSB4, Charizard received some helpful buffs in game updates. Update 1.0.8 improved its up and down throws by significantly improving the former's KO potential and re-purposing the latter from a KOing option into a very useful combo starter. Most noticeably, update 1.1.5 improved its aerial presence by increasing its air speed and decreasing its aerials' ending lag, as well as strengthening its already powerful back aerial and Flare Blitz.

Overall, Charizard is noticeably better compared to how it was during the early days of SSB4. This has resulted in it achieving much greater success at regional tournaments, and slightly improved results in national regional tournaments. As such, opinions on Charizard's viability have notably improved over the game's lifespan. This, in turn, has been reflected in Charizard rising from the bottom-tier to its current ranking of 43rd out of 55 on the tier list, which places it in E tier and assesses it as a mid-tier character.

Charizard's trophy in Super Smash Bros. for Wii U

The iconic Fire/Flying-type Pokémon. Charizard's scorching breath can melt anything in its path. It soars through the air, seeking only worthy foes to test itself against. In Smash Bros., Charizard unleashes the destructive Flare Blitz special move—a move so strong, it even injures the user!

The iconic Fire/Flying-type Pokémon. Charizard's scorching breath can melt anything in its path. It soars through the air seeking only worthy foes to test itself against. In Smash Bros., Charizard unleashes the destructive Flare Blitz special move—a move so strong, it even injures the user!

Charizard, a Fire- and Flying-type Pokémon, can burn through anything with the flames it breathes. It is constantly on the lookout for powerful opponents, and where better to find them than in this game? Its huge build and special moves mean it can inflict massive damage, and its Flare Blitz is so powerful, it even hurts Charizard itself!

Charizard (Alt.)'s trophy in Super Smash Bros. for Wii U

Charizard's Flamethrower attack can be sustained by holding the button. The flames will gradually die, but a short break will recharge them. Charizard's down special Rock Smash crushes a rock and hits foes with the pieces. Charizard won't flinch while crushing, but others can break the rock...

When using Charizard's Flamethrower move, hold the button to keep breathing fire. The flames gradually die down, but you just need to rest for a bit before doing it again. If you get hit while you're using the down special Rock Smash, you won't flinch, but someone else can break the rock instead, making your attack fail. 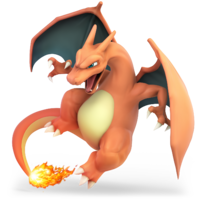 Charizard, as it appears in Super Smash Bros. Ultimate.

In terms of execution, Charizard functions differently from in Smash 4 because of the overall changes to its moveset and different engine, but it generally serves the same purpose as a lightning bruiser. It is fundamentally better but is counterbalanced by gaping holes in its kit such as forward aerial not autocanceling from a short hop. As such, while Charizard is worse relative to the cast compared to its solo appearance in SSB4, as a member of Pokémon Trainer's team, it is more useful because it allows the Trainer to adapt to situations where its longevity and KO power are needed, while also being able to replace itself with Squirtle or Ivysaur in cases where its weaknesses can be exploited.