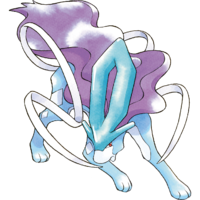 Suicune is a Water-type Legendary Pokémon introduced in Generation II, and the version mascot of Pokémon Crystal. Suicune is categorized within the Pokédex at #245 as the "Aurora Pokémon". Along with Entei and Raikou, Suicune is part of a trio commonly referred as the legendary beasts: in Pokémon Gold and Silver and their remakes Pokémon HeartGold and SoulSilver they can be found in the Burned Tower, though when interacted, with they run away. In the original Pokémon Gold and Silver Suicune starts roaming Johto like Entei and Raikou, but in Crystal and in the Generation IV remakes it is encountered multiple times on the overworld without being fought, and is finally battled as a normal static legendary in the Tin Tower (Crystal) or Kanto Route 25 (HeartGold/SoulSilver).

Blizzard is a special Ice-type move with 110 power (120 before Generation VI) and 70% accuracy with a 10% chance of inflicting the Freeze status on the targets. It gains perfect accuracy during a hailstorm. Suicune, like most other Water-type Pokémon, can learn it by TM14, and was able to learn naturally starting with Platinum.

Aurora Beam is a special Ice-type move with 65 base power and 100% accuracy with a 10% chance of lowering the target's Attack stat by one stage. Suicune can learn it naturally in every game starting with Crystal. Despite its portrayal in SSB4 and Ultimate, it does not cause freezing. 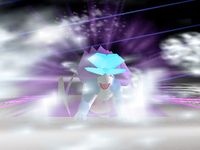 Suicune is treated as a "legendary" Poké Ball Pokémon; its chance of appearing is much rarer than most of the others, and in return its attack is more powerful. Suicune uses Blizzard as its attack. A cloud of icy wind surrounds Suicune. Any character that makes contact with the cloud of wind will take damage, and any heavily damaged character may be briefly frozen. The attack can be DI'd downward if the player is in the soft platform with Suicune and being trapped. The player can partially dodge Suicune's attack by crouch canceling and sidestepping constantly if the attack occurs in the main platform. Suicune's attacks do not harm the summoner.

Suicune features as a collectible trophy, unlocked as one of the trophies that can be collected randomly in the Trophy Lottery. 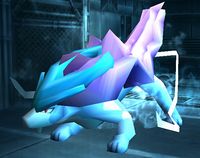 Suicune returns to the Smash Bros. series. Unlike most returning Pokémon, Suicune has been given a new attack, Aurora Beam, which fires horizontally and deals a 35%-damage blow to anyone in front of it. Suicune makes the same windup animation it had from Melee, but the ensuing attack is completely different. The attack has guaranteed one-hit KO power, but because it is also a semi-spike, characters with a grab aerial can survive by DI'ing downwards and attaching to the edge as they pass by. This survival technique requires strict timing to pull off, and the player must be very close to one ledge (left or right) and very far away from the opposite ledge before getting hit by this attack. However, it is very difficult to perform since this attack is extremely swift and quite unpredictable.

Touching Suicune before it attacks deals 4% freezing damage, and touching it afterwards deals 10% normal damage with a slash sound. Contact with its body could KO below 100% in some situations, and frozen characters will have a considerably higher risk of being KOed.

Suicune
An Aurora Pokémon. It has the power to instantly purify even the filthiest water. Suicune is said to be the reincarnation of the northern wind, so when it shows up, so does that wind. Suicune uses the move Aurora Beam--aurora light focused into a powerful beam. Along with inflicting damage, this attack also lowers the target's Attack power.

Suicune reprises its role, and like all legendary Pokémon it can be summoned by the newly introduced Master Ball. Instead of OHKOing the fighters it hits, Aurora Beam now keeps them frozen for a long time: a frozen character that falls off-stage is thus very likely to get KOed.

Suicune's trophy appears in both versions. In Super Smash Bros. for Wii U it is part of the Legend of Pokémon Gold & Pokémon Silver Trophy Box.

Suicune's trophy in Super Smash Bros. for Wii U

A Legendary Pokémon that emerged from the ashes of the Burned Tower, Suicune is a Water-type Pokémon easily identified by its long, purple mane. In battle, it'll head toward a nearby fighter and fire an Aurora Beam all the way to the edge of the screen. If you get hit, you'll be frozen solid!

Suicune is one of the Legendary Pokémon from the Burned Tower in Ecruteak City. Its mane is said to resemble an aurora floating over it. If summoned into battle, it'll make its way straight for a nearby fighter and unleash its Aurora Beam. The target, frozen in place, is unable to resist as it's blown off the stage.

Suicune returns as a Poké Ball summon, using Aurora Beam as it did in Smash 4. The freezing effect is shorter than in Smash 4 but can KO heavily damaged opponents without freezing them similar to Brawl.

Suicune also appears alongside Raikou and Entei as an Ace-class primary spirit.

The Spirit Battle Suicune is apart of uses a Greninja puppet fighter and is fought on the Suzaku Castle stage. He is fought along the Pikachu and Incineroar puppet fighters representing Raikou and Entei respectively. During the battle, the floor is made of lava, referencing how Raikou, Entei, and Suicune were initially three unknown Pokémon who perished at the fire of the Brass Tower.