Goldeen (トサキント, Tosakinto) is a creature from the Pokémon series. It has appeared as a Poké Ball Pokémon in every Smash game.

Goldeen is a Water-type Pokémon introduced in Generation I, and is categorized within the Pokédex at #118 as the "Goldfish Pokémon". It is commonly found by fishing, and it evolves into Seaking at level 33. It is registered as #118 in the National Pokédex.

Splash is a Normal-type move: while being part of the starting moveset of several Pokémon, it has no effect whatsoever. It is most commonly associated with Magikarp and, in contrast with its Smash depiction, Goldeen is not able to learn it in any game. However, the exact usage of it in Smash is likely a reference to Misty's Goldeen from the anime, who was notable for being completely useless on land, and would only be able to flop around similarly to the Goldeen in Smash unless in the water.

Goldeen appears as a Poké Ball Pokémon in Super Smash Bros. It flops around on the stage helplessly until it disappears or has fallen off the stage. It is one of two completely harmless Pokémon in the game, the other being Mew. Goldeen does not have any hitboxes, so it doesn't do any damage to any of the characters. Thus, it was established as the "dud" Pokémon of the Smash Bros. series. 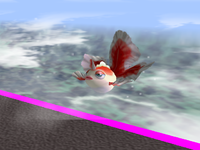 Goldeen returns in Super Smash Bros. Melee to reprise its role as something that does not affect gameplay in any way.

Early in Melee's lifespan, rumours claimed that Goldeen could sometimes activate Horn Drill upon being summoned from a Poké Ball, leading to a one-hit KO. This was later disproven due to advances in hacking, as well as a general lack of proof. 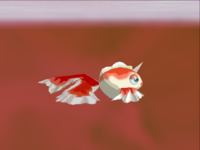 A larger balloon of Goldeen (in actuality, the 3D model of Goldeen used in Pokémon Stadium for Nintendo 64) is one of the many floating and moving "platforms" that make the Poké Floats stage.

Goldeen features as a collectible trophy, unlocked as one of the 100+ trophies that can be collected randomly during normal play, such as in the Trophy Lottery, and throughout the various Single-Player game modes.

Goldeen
These Water-types are often referred to as "water dancers," as their elegant fins make them incredibly agile underwater. They can even travel upstream in rapids at a speed of five knots; of course, they're not quite as nimble on dry land. Goldeen's Horn Drill is so strong that it can KO an enemy with one strike if it connects. 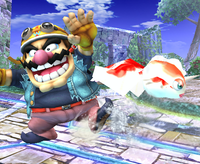 Goldeen returns in Super Smash Bros. Brawl, and is, once again, a "dud" Pokémon. The description on the Smash Bros. DOJO!! tells the player to watch out for Murphy's Law when using Poké Balls, showing Goldeen's picture.

A Goldfish Pokémon also known as the Queen of the Sea. In contrast to its elegant appearance, it's wild and has a severe horn attack. Among the techniques it can master, Horn Drill is very reliable. It evolves into Seaking, but if it's raised without evolving, it can learn the powerful Bug-type move Megahorn. There are male and female Goldeen--the male's horn is longer.

A Goldfish Pokémon also known as the Water Queen. In contrast to its elegant appearance, it's wild and has a severe horn attack. Among the techniques it can master, Horn Drill is very reliable. It evolves into SEAKING, but if it's raised without evolving, it can learn the powerful Bug-type move Megahorn. There are male and female GOLDEEN--the male's horn is longer.

Goldeen in Super Smash Bros for Wii U.

Goldeen returns in Super Smash Bros. 4, keeping its lack of function from the previous installments. It can also be summoned from the newly added Master Ball item, which otherwise contains only rare or legendary Pokémon. This Master Ball variant behaves exactly the same as the regular version, and was added as a joke.

Goldeen's trophy can be obtained in both versions. In Super Smash Bros. for Wii U it is part of the Pokémon Trophy Box.

Goldeen's trophy in Super Smash Bros. for Wii U

This Water-type Pokémon sports a fancy horn on its head. An excellent swimmer, it can literally swim up waterfalls. In the world of Pokémon, this elegant Pokémon has a variety of effective moves in battle. In Smash Bros., however, all it can use is an ineffective Splash attack.

A Water-type Pokémon with a distinctive horn. Thanks to its powerful fins, Goldeen can swim comfortably through the most torrential waters and even up waterfalls. It's known for both its strength and grace. That said, don't expect it to make a big splash in this game – just a little one when it uses Splash... It's super ineffective!

Goldeen returns in Super Smash Bros. Ultimate as a Poké Ball Pokémon. Once again, it uselessly splashes around dealing no damage. It can still come out of a Master Ball like in Smash 4.

Golden also appears as a spirit.