Not to be confused with Pokémon Stadium 2.

In Melee's All-Star Mode, this stage is played on when the player faces Pikachu and any of its teammates.

In Ultimate, the jumbotron has a wider screen just like Pokémon Stadium 2. 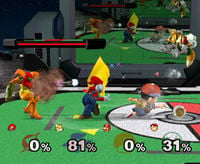 A battle in the main area in Melee.

The basic stage is symmetrical and consists of one large main platform, with two floating soft platforms above. After a varying period of time, the basic stage transforms into a random one of four variants, each based on a type from the Pokémon series. After a while, the stage reverts to the basic form, and the cycle repeats. The same variant can occur consecutively. All forms have an impassable vertical pillar underneath the main platform.

In the background, there is a large jumbotron which can display the battle itself, a symbol representing the upcoming variation during a stage transition, or the current standings of fighters and the match timer. In Brawl, the jumbotron in the background shows the fight in a lower picture definition than in Melee, and uses a new, clearer font for its display. 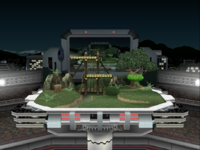 The Grass variant takes place in some kind of forest or park. The main platform has slightly elevated plateaus on both sides. A small stream separates the left plateau and the central area, causing a slight depression. A wooden structure with two platforms, one above the other, occupies the middle-left part of the stage, while in the right part there is a tree whose branches form a third platform. 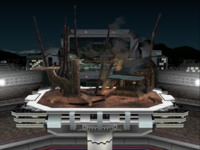 The Fire variant takes place in a burning forest. The center of the main platform is occupied by a small depression. On the left side there is a ruined tree: players can stand on top of it, but, due to its height, often need double jumping to reach its top. From the left side of the tree stems a branch which supports a soft floating platform.

On the right side there is a burning shack, the roof of whose porch acts as another soft platform. Note that the fire in the background is purely aesthetic and has no gameplay effect. 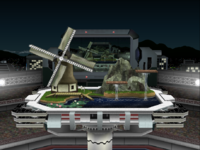 The Water variant takes place near a pond or lake. The whole right side is occupied by a flat pond, while on the left there is a small elevated pier which slopes down on both its sides. Over the pond, two soft platforms are suspended by water spouts, the right one higher than the left one.

On the left side there is a windmill. Its arms spin slowly and can be stood upon, but players on the current lowest arm fall. The arms are soft in Melee and Ultimate but hard in Brawl. 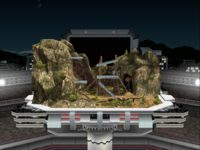 The Rock variant takes place in a canyon near a mine. Its terrain is the most uneven of all versions. The right part is flat and empty, while in the middle there are three soft platforms one above the other, of which the bottom one touches the ground and can be walked up from it.

The left side is occupied by a large solid mountain, on whose right side stem two more soft platforms. The walls it creates can cause infinites and caves of life. The top of the mountain itself acts as a solid platform. The mountain's left side is almost vertical and ends almost at the right edge of the stage, leaving a small walkable space.

With hazards off in Ultimate, the stage remains in the Basic Version for the whole match.

A battle in the game Pokémon Stadium, notably including the Poké Ball logo in the middle and a crowd watching the battle.

While the stage is not specifically based on anything from the Pokémon video game series, it may be a general representation of a Gym. A possible specific origin could be the Pokémon Stadium games, from which the stage's name possibly comes from and whose arenas in-game feature a Poké Ball logo in the middle, a crowd watching the battle and, in the case of Gym Leader battles, type-related aesthetics. However, the arenas in the Pokémon Stadium games, including the type-themed ones, do not affect the battles in any way.

Another possible source is the Pokémon anime, in which, during tournament battles, the arena changes its terrain frequently to hinder or help either Pokémon. This was seen at least in the preliminary rounds of the Indigo League, during which each of Ash Ketchum's four initial battles was in a different battlefield representing a specific elemental type.

Pokémon Stadium was one of the few stages that people in tournaments have almost never questioned being legal, and for a long time, was a starter. Many people considered Pokémon Stadium to be one of the fairest stages in Melee because the shifting terrain was generally not very disruptive to gameplay, and for some time, was thought to prevent excessive projectile camping. However, recent metagame developments have shown that Fox and Falco have a very large advantage on this stage because the geometry of the stage and terrain allow them to projectile camp with Blaster very safely. It is also the only legal stage with walls, allowing Fox to perform the drill shine infinite. The large horizontal size of the stage benefits their movement greatly, while hindering other characters who cannot traverse across the stage as easily, while the low ceiling allows even earlier KOs for Fox's two main finishers. The transformations also benefit Falco, and especially Fox, greatly in several matchups by either giving them more room to approach or safe spots to camp in.

While the long stage size, platform placement of the main stage, and low ceiling can also benefit characters with good dash dances such as Marth and Captain Falcon, the advantages that these characters gain pale in comparison to the aforementioned advantages realized by Fox and Falco. As such, it has been deemed a counterpick stage in more recent rulesets, with some Melee players arguing that it should even be banned because the advantages given to those two characters are too overwhelming for the majority of the cast. Many players will choose to "wait out" the Fire and Rock transformations by moving to the opposite side of the stage as their opponent, without approaching or attacking them, until the transformation returns to neutral. As a result, many players complain that the transformations result in several minutes of wasted time during a set.

"Frozen Stadium", a modded version of Pokémon Stadium which disables the stage transformations, has become increasingly popular in competitive play. It was first used sporadically in regional scenes, such as at Battle of BC 3, and became more widespread following the dominance of online play in 2020, as the Project Slippi netplay system uses Frozen Stadium as a default stage in unranked play. It has yet to become standard in offline tournament play, however. Supporters of Frozen Stadium argue that the removal of transformations makes the stage less randomized, more balanced, and removes the time wasting components often seen during the Fire and Rock stages. Opponents of Frozen Stadium argue that this would open up a path towards increased levels of modding and possibly the introduction of new player-built stages, making it more difficult to run in tournaments and possibly leading to legal issues with Nintendo. They also argue that stalling during the transformations should be seen as a viable counterpicking strategy, and that Frozen Stadium's layout is too similar to that of Final Destination, further hurting characters who have a perceived disadvantage on both stages.

The stage is more debatable in its neutrality; while it is a starter in the Unity Ruleset and always in seven-stage starter lists, Lylat Cruise is often chosen over it in five-stage starter lists, while never being a starter in three-stage starter lists. The change in unquestioned neutrality comes from changes to the stage itself: first, the lips at the edges of the stage are much more thin and deceptive, occasionally flustering recoveries from slightly underneath the stage or even regular recoveries away from the stage. The most notable change in the stage, however, comes from the redesigned water transformation: while it looks almost the same as in Melee, the blades of the windmill are no longer soft platforms and cannot be passed through in any direction, resulting in stage traversal difficulties and significant caves of life. Like in Melee, Brawl players tend to camp out the Rock and Fire transformations, hiding behind the large rock and the tree until the transformation has ended, slowing down gameplay and matches.

The stage is usually banned, as it has too many similarities to Pokémon Stadium 2 when hazards are turned off. Some regions, however, have Pokémon Stadium as a legal starter over Pokémon Stadium 2, most notably Chicago and, at one point, Maryland/Virginia. This is mainly due to some players believing the stage is a more reasonable size when compared to Pokémon Stadium 2. Opponents of this stage, on the other hand, cite several inconsistencies that make the stage more "janky" and therefore ill-suited for competitive play compared to its successor; most notably, the stage suffers from bugs that can cause players to clip inside the main platform of the stage, and prior to version 12.0.0, the right platform featured an invisible slant that made it impossible to perform locks over it. The stage's camera also causes the visibility of the edges to be obstructed.

Pokémon Stadium
Trainers come from far and wide to congregate at Pokémon Stadiums, the ultimate venues to show off their Pokémon teams. There are many different arenas with varying terrain designs, some of which afford advantages to certain Pokémon. This particular stadium is reserved for huge events and boasts a big screen and spectacular fireworks.