Smashville's only dynamic element is a floating soft platform that moves from side to side over the stage.

The stage is home to numerous background characters from the Animal Crossing series and features a day-night cycle that runs according to the console's internal clock. On Saturday evenings, the stage that K.K. Slider performs on will be set up at 7:30 PM to 8:00 PM; which is when he appears to play, he will then perform his concert until 12:00 AM Sunday. Other background characters spectate the fight, reacting to KOs and visibly favoring one fighter or another.

Small, red balloons sometimes float overhead, carrying food items if they are enabled (even if the overall item frequency is set to "none"). The balloons can be popped with one hit. Moves that change once hitting a hurtbox will interact with the balloons, such as Bouncing Fish.

In Super Smash Bros. for Wii U, the moving platform, background characters and balloons do not appear in the Ω form. Additionally, the stage is increased in length somewhat to match that of Final Destination.

With hazards off in Ultimate, balloons no longer appear and the moving platform stays in the middle above the primary platform. Oddly, the platform does not start in this position, and moves from the right to the middle at the start of each battle.

The following characters appear in the background of Smashville:

There are certain stipulations to how the characters appear: 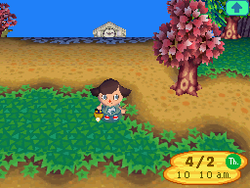 A Town in Wild World.

Each Animal Crossing game is mostly set in a small town. A typical town can be seen in the background of this stage and retains almost everything that is present in a town in the Animal Crossing series, such as trees, rocks, flowers, a river with bridges, and a waterfall along with various buildings:

Strangely, despite Tom Nook's store being one of the most important buildings in the Animal Crossing series, not one version is present in this stage. The Town Gate, a guaranteed location in Wild World, does not appear either. The background also contains elements that occasionally appear, such as the taxi driven by Kapp'n, who drops players off at the Town Hall; a flying saucer flown by Gulliver, a seagull astronaut; and Pete, a pelican mailman, flying across the background. At night, constellations can be seen in the sky, similar to the constellations that can be designed by the player at the museum's observatory.

In Animal Crossing, there are balloons that occasionally float over the town carrying a present. In Wild World onwards, if the player has a slingshot, they can use it to pop the balloon. In the original Animal Crossing, they instead must wait for it to fly into a tree, then shake it out. This stage features balloons that pop when attacked, and, if items are enabled, carry food.

The stage was given a visual redesign in Ultimate which, while still largely based upon Wild World, also draws inspiration from other games in the Animal Crossing series. For example, the bridges are now curved like in Animal Crossing: City Folk (rather than flat as in Wild World), and the clouds are now wispy and slightly transparent as they are in Animal Crossing: New Leaf. Other minor changes have been made, such as changing the positions of certain objects and introducing new types of flowers and fruit trees.

In Brawl this stage is a starter in tournaments because of its simple layout and lack of stage hazards. It is one of the three Brawl stages legal in Japan; the others are Battlefield and Final Destination.

The 2017 recommended ruleset for SSB4 also lists this stage as a starter in tournaments, for the same reasons as in Brawl.

Most rulesets for Ultimate keep the stage as a starter, as it still lacks any dangerous stage hazards. However, it should be noted that due to disabling stage hazards also disabling the platform moving, gameplay on Smashville is different than in previous games.