Training (トレーニング, Training) is a stage in Super Smash Bros. Ultimate. It is exclusive to Training Mode (replacing the Random Stage option on the selection screen) and has no Battlefield or Ω form.

A full view of the stage

Training is a very large stage with a grid for a background. The grid is scored with large gray boxes, each made of a 10 X 10 set of small gray squares. Larger colored squares indicate multiples of 5 and 10, with the former being blue and the latter being red. In addition, a large red line labelled 0 is present in the flat plane section. The distance to the blast zones from 0 on Final Destination and Battlefield are also displayed.

The stage is divided into three sections: a large flat solid platform on the right, a Battlefield section in the middle and a section with a single vertical wall to the left. All solid ledges are grabbable. The primary revival platform drops players directly on the 0 line.

The stage has a unique camera which always faces the stage straight on, so that the grid will not be subject to parallax error; however, certain Final Smashes are able to bypass this temporarily. Contrary to common belief, the stage itself is not two-dimensional, and thus hitboxes will behave normally on it. 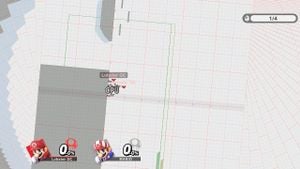 The stage, partway through being flipped. Note the afterimages at the top and bottom of the stage