Fourside (フォーサイド, Fourside) is a stage in Super Smash Bros. Melee and Super Smash Bros. Ultimate. In Melee, it is an unlockable stage, while in Ultimate, it (along with all other non-DLC stages) appears as a starter stage. It is one of Ness's home stages, but Pichu and its teammates are faced here in All-Star Mode.

The stage is set on the rooftops of three buildings of the city of Fourside at nighttime, with several more skyscrapers in the far background. Between the buildings there are pits narrow enough to be scalable by wall jumping.

The building on the left has a slanted, triangular roof. A crane in its background keeps a floating soft platform suspended over it. Occasionally, the crane activates and moves the platform: it starts almost completely over the roof, then it moves to the left until it is fully over the pit, then slighly upwards, then to the right over the building, then down to its starting position.

The skyscraper in the middle, the Monotoli Building, is the largest of the three. A tall spire rises on the left part of its roof: its top is flat, and at about half its height jut out two small ledges. The right part of the roof is a wide flat surface with a helipad in the background: occasionally, a yellow helicopter flies to and from it, with no effect on the fight.

The building on the right is the shortest one, and its roof is a simple flat surface.

Occasionally, a UFO floats downwards with an eerie noise and remains suspended over either the left or the right part of the stage, serving as a temporary semisoft platform which bobs slightly. Its slippery surface is slightly slanted with a bulge in the middle. Its middle section is directly aligned either with the right pit or the middle of the roof of the left building, depending on its position. Wavedashing on the UFO can provide a major distance boost.

After about thirty seconds from its appearance, the UFO starts blinking and quickly disappears into thin air. In Ultimate, however, it has an actual animation, showing it flying away from the stage and into the moon.

The idea of fighting on top of three skyscrapers, as well as the general layout of the stage, makes this stage very similar to the Saffron City stage in the original Super Smash Bros.

In Super Smash Bros. Ultimate, the main platform of the Ω form and Battlefield form is reminiscent of the Monotoli Building, such as the floor resembling the rooftop of the building and the walls resembling the building's facade. The platform is the same size and shape as Final Destination and Battlefield, respectively. The actual Monotoli Building and the surrounding buildings are absent and UFOs do not appear. The three soft platforms of the Battlefield form resemble the soft platform the crane supports in the regular form. 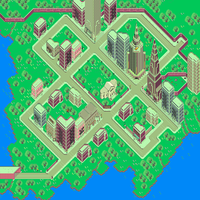 Fourside as it originally appeared in EarthBound. 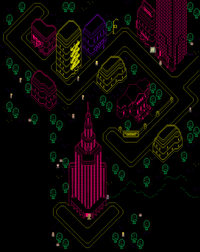 Moonside, as seen in EarthBound.
The background music of EarthBound's opening sequence.

This stage is based on the city of Fourside from EarthBound, which is the largest town in Eagleland and the fourth that Ness visits. It is visually inspired by New York City, and includes attractions such as a theatre, a dinosaur museum, a café, and an expansive department store.

It also has a dark and bizarre parallel version, Moonside, created by the power of the evil Mani-Mani Statue. Moonside is primarily made up of neon lights and features inhabitants who behave and speak erratically. Once the Statue is defeated by Ness and Jeff, Moonside disappears. While Fourside is set during the day in EarthBound, it appears at night in Smash, causing it to more closely resemble Moonside's darker color palette; however, it lacks the shining neon lights that make up the majority of color in Moonside.

The Monotoli Building is one of the tallest buildings in the city, with a private helipad on its roof. It is the workplace of Fourside's mayor, Geldegarde Monotoli, who—under the influence of the Mani-Mani Statue—keeps Paula prisoner. After Paula is freed, he offers to lend his helicopter to Ness and his friends to help them reach their next location; however, Porky Minch steals the helicopter and flies away. In Melee, the helicopter has a more realistic appearance, while in Ultimate, it closely resembles its appearance in EarthBound. In both games, the design of the Monotoli Building is different than how it appeared in EarthBound, though it retains the vertical "MONOTOLI" sign on its front.

The top of the left building in this stage resembles Fourside's Dinosaur Museum. However, the museum is not a skyscraper in EarthBound and is much farther from the Monotoli Building.

The crane on the left building is a reference to the ones utilized by Gerardo Montague and his brother George in EarthBound.

The UFO's appearance is based on the ones which appear in the opening sequence of EarthBound, which shows a still image depicting three large flying saucers attacking a small town. The sound which signals the UFO's entrance in Smash originally played during this opening sequence. Large flying saucers make no further appearances in the game; however, smaller UFOs appear as enemies in both EarthBound Beginnings and EarthBound.

Fourside is often banned due to the various ways in which players can camp and stall due to the large size and unusual geometry of the stage. The lack of large, flat platforms also hampers fighting between players, particularly in doubles. In addition, the UFO provides a platform that is too close to the upper blast line, thus potentially causing early vertical KOs. The presence of pits between buildings gives relevant advantages to some characters, such as Peach (who can stall indefinitely by using Peach Bomber repeatedly against the walls), while greatly crippling characters with primarily horizontal recoveries, such as Donkey Kong, who are even more susceptible than usual to early KOs from meteor smashes and spikes. The narrow pits also give an advantage to characters capable of wall jumping such as Mario and Captain Falcon and makes recovery very difficult for Ness should he fall between them due to the wide angle needed for PK Thunder to be used correctly, making directional air dodging his only form of recovering.