Minecraft World (マインクラフト ワールド, Minecraft World) is a DLC stage in Super Smash Bros. Ultimate. It is bundled with Steve in Challenger Pack 7, which is also part of the Fighters Pass Vol. 2.

The stage is set in Minecraft's Overworld and has a largely standard design, being a flat platform with edges that extend to the lower blast zone. The stage can have six different biomes, each having different arrangements of blocks and soft platforms. The blocks are breakable, will incur 6 frames of hitlag when hit, and will not respawn when broken. Each block has different materials for mining (which will eventually break them) but the large, main platform will give the same materials across the different biomes.

It features a day/night cycle. Two of a randomly selected farm animal (two cows, sheep or chickens) will appear in the background as soon as the stage starts. Some biomes may feature Villagers that perform farmwork during the day and will retire to their homes at night. They can be seen occasionally turning to fighters and watching the battle when close. At nighttime, one to three monsters will appear; these may be a Zombie, an Enderman, a Skeleton, or a Spider, and do not affect gameplay. When morning starts, the monsters will either catch fire and burn up or simply retreat depending on the monster, repeating the cycle.

Normally, the stage randomly loads in different biomes, but a specific biome can be chosen by holding specific buttons before selecting the stage, similarly to Boxing Ring:[1]

In its Ω form and Battlefield form, the stage always loads in the plains biome, but retains its day/night cycle. It is largely the same other than lacking any hazards and being resized and reshaped to match Final Destination and Battlefield, respectively. The Battlefield form's platforms are similar to those found on the birch forest, savanna, and stone shore biomes. The main stage is set on a grass path rather than varied terrain, since the terrain of Battlefield and Ω stages does not affect which materials can be mined. Unique to this stage, the 8-player Ω form's main platform is completely different from the regular Ω form's platform, rather than simply being a scaled up version of it, presumably for consistency with the size of the stage's blocks.

With hazards off, the stage will still load one of the six biomes, but all breakable obstacles are removed. The platforms found on the birch forest, savanna, snowy tundra, and stone shore biomes still appear.

A randomly generated world in Minecraft.

In Minecraft, worlds are created by choosing the "Create New World" option on the world select screen. Worlds are generated based off of seeds, values that include negative and positive integers. Seeds are either randomly generated by an algorithm or manually generated by the player by typing strings of letters and numbers in the seed bar.

Within a randomly-generated world, there are a number of biomes, which determine the weather, terrain, and mobs that will spawn in that part of the world. The variations of this stage represent a selection of the biomes.

Villages are unique structures that can be found in a variety of biomes, including plains, savannas, snowy tundras, and taigas. The plains variant, which appears in Smash, is the type that has been in the game the longest and represents the most generic village, where villagers farm and live in wooden houses. Villages often contain loot, such as in chests within houses, but it is possible to trade with the villagers for items as well, using emeralds as a currency. At night, all villagers will retreat into their homes to sleep in order to avoid Zombies, lest they be turned into Zombie Villagers or otherwise killed by them.

Minecraft World has been seen legal in tournaments infrequently. As the breakable blocks are removed with hazards off and the specific layout can be chosen, there have been talks of making specific forms of the stage legal—specifically the savanna, forest, tundra, and/or stone shore biomes. However, the stage also provides a mild advantage to Steve due to being designed with his mining mechanic in mind, and its size has proven somewhat controversial. 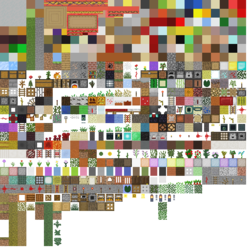 Texture sheet for the blocks in Minecraft World.