Announced at E3 2001, Princess Peach's Castle (ピーチ城, Peach Castle) is a stage in Super Smash Bros. Melee and Super Smash Bros. Ultimate. It is the roof of the castle as seen in Super Mario 64. In Melee's All-Star Mode, this stage is played on when the player faces Peach and any of her teammates. In Melee, Dr. Mario is fought here for his unlock battle, while in Ultimate, Peach is fought here for her unlock battle. 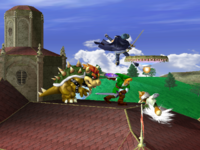 The stage itself consists of two halves separated by a tower in the center. Near the edge of both halves is a small floating stand that rises when a character stands on it. The middle tower contains two layers; the bottom layer is a narrow, rising sloped area that can be used as a foothold to reach the top layer. The only way between the two halves of the stage is to pass over the entirety of the central tower; the edges of the stage are walls that travel all the way down to the bottom blast line at water level. Although swimming was introduced with Brawl, fighters fall through the moat in the stage's Ultimate appearance rather than swimming in it.

Occasionally, switches will appear somewhere on the castle. These switches are pressure activated, and come in three different colors: red, blue, and green. When a switch is activated, some "!" Blocks and some platforms of the same color will appear somewhere on the castle, and it will also apply about a full second of freeze frames to whoever (or whatever) touched it. Two Red "!" Blocks can appear on either side of the castle roof, a sole Blue "!" Block can appear at the top of the castle, and two Green "!" Blocks can appear bunched together on the far left side of the castle, suspended in the air. If items are turned on, the blocks release items when one touches them in any manner. 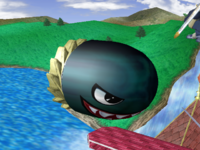 The Banzai Bill that appears in the stage.

Every one to five minutes, a large Banzai Bill will shoot from the side of the stage in the sky. This is first signaled by the sound of a cannon firing, and then the Banzai Bill will appear from a random side of the screen (including the top) and move in a slow straight path until it crashes into the castle. Approximately four seconds after contact with the castle, the Banzai Bill will explode, dealing around 30-45% damage with multiple hits with the last hit dealing very large knockback, resulting in a one-hit KO if a player is caught by all the hits. Aesthetically, fabrics (like Mario's Cape or the flags on the stage) will shake when the explosion occurs. It is possible to throw or hit an opponent into the explosion. Before it explodes, the Banzai Bill itself also does light damage and soft knockback if touched.

In Super Smash Bros. Ultimate, the Ω form and Battlefield form are suspended in the air with the main platform no longer extending below the blast line. The main platform is completely flat and is the same size and shape as Final Destination and Battlefield, respectively. The colored switches, floating platforms, and Banzai Bill are absent. The main platform takes elements from Princess Peach's Castle, such as the roof being the floor and a gray brick structure as the walls. The three soft platforms of the Battlefield form are based on the soft platforms that appear when the green switch is activated in the regular form.

With hazards off in Ultimate, the colored switches and Banzai Bills are absent, and the floating platforms on each side don't move when fighters stand on them.

Peach's Castle as it originally appeared in Super Mario 64.

This stage is based on Peach's Castle, with its current design debuting in Super Mario 64, where it serves as the game's main hub and has appeared in numerous Mario titles since. The castle is surrounded by the castle grounds, which also features hills to prevent the player from escaping, trees, a waterfall, and a moat.

In Super Mario 64, the castle is taken over by Bowser, who takes control of the Power Stars and seals Princess Peach inside the fresco over the castle entrance. After Mario defeats Bowser and collects all of the game's Power Stars, the cannon in the castle grounds is unlocked, which will allow the player to access the roof of the castle, which hides Yoshi and three 1-Up Mushrooms.

Banzai Bills are larger versions of Bullet Bills that debuted in Super Mario World; however, they did not explode prior to the release of Melee. The Banzai Bill's design in Melee is completely original, which also features a rotor-like rear portion. In Ultimate, the front half of the Banzai Bill is changed to resembles its appearance since New Super Mario Bros., but it still keeps the rotor-like rear portion.

While initially available in older Melee tournaments as a counterpick stage, the stage is currently banned. The stage's large permanent walls can allow for infinites, especially Shine infinites from Fox, and the Banzai Bills are deemed too disruptive for a fair competitive match. The walls can also promote camping, as they reduce how many angles players can attack each other.

Princess Peach's Castle
Princess Peach's magnificent royal castle appears to be inhabited solely by the princess and a multitude of Toads. Bowser tried to steal the castle's Power Stars in Super Mario 64, and in Paper Mario, the surly archfiend actually lifted the castle into the stratosphere with his own filthy fortress.