Knuckle Joe (ナックルジョー, Knuckle Joe) is an enemy from the Kirby universe.

Knuckle Joe debuted as an enemy in Kirby Super Star (Kirby's Fun Pak in PAL regions). He has a stout, humanoid appearance with spiky hair, wearing a bandanna and a bodysuit. Kirby can copy him to obtain the Fighter ability, and can also summon him as the ability's Helper. In Super Star, enemy Knuckle Joes appear with red bodysuits and white hair, while friendly Knuckle Joes have blue bodysuits and blonde hair; later games use the Helper design in all instances, which is reflected in the Super Smash Bros. series.

Knuckle Joe's attacks as an enemy usually consist of moves such as Vulcan Jab (rapid punches), Smash Punch (a wide punch that acts like a projectile), and Rising Break (an uppercut). Kirby can utilize these same attacks with the Fighter ability. In Brawl, SSB4, and Ultimate Knuckle Joe appears as an Assist Trophy and performs these same maneuvers, calling out their names as he does so.

Knuckle Joe also appeared as a recurring character in the Kirby: Right Back at Ya! anime. Reflecting his in-game appearance, he starts out as a minor antagonist before befriending Kirby and aiding him in later episodes. His Japanese actress in the anime, Minami Takayama, also provides his Japanese voice for Smash.

Knuckle Joe was mentioned in the Fighter Kirby trophy as "an enemy skilled at physical attacks". 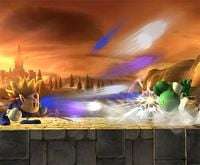 In Super Smash Bros. Brawl, Knuckle Joe is one of the supporting characters that spawns from the Assist Trophy item. When Knuckle Joe is summoned, he uses his "Vulcan Jab" technique, which is a series of rapid punches, on the nearest foe. Afterwards, he finishes the opponent off with one of two "finisher" attacks: the strong, short-ranged "Smash Punch", or the electricity-charged uppercut known as the "Rising Break" technique. The finisher he uses is chosen at random. He will use the finisher either the second or third time he did the Vulcan Jab. He could be considered one of the most powerful Assist Trophy characters, because if he manages to trap an opponent in his initial barrage, he can KO them at 0%.

For this game, Knuckle Joe is peculiarly voiced by Alesia Glidewell, who also voiced Zero Suit Samus and Krystal.

Knuckle Joe
A martial artist known for amazing attacks like the Vulcan Jab. With his bandana, he looks and fights the part of a Muay Thai boxer. When Kirby copies Knuckle Joe, he gains the fighting techniques of a hand-to-hand-combat expert. Knuckle Joe also engages in friendly block-breaking competitions with Kirby. His other famous techniques are the Smash Punch and Rising Break.

Knuckle Joe attacking in Super Smash Bros. for Wii U.

Knuckle Joe reprises his role as an Assist Trophy in Super Smash Bros. 4. He is functionally identical to his Brawl appearance, but the overall power of his Vulcan Jab and Rising Break have been considerably reduced, and neither attack can reliably OHKO opponents. As a trade-off, he now performs his attack pattern twice (a series of Vulcan Jabs then finishing with a Smash Punch/Rising Break) as opposed to once in Brawl, making him much more effective. He can also be defeated this time around.

Knuckle Joe's trophy is one of the very few (along with Shadow the Hedgehog, Timmy & Tommy, Master Hand, and Crazy Hand) to be a Challenge unlock in both versions of SSB4. In Super Smash Bros. for Nintendo 3DS it is obtained by playing 10 collective hours (total gameplay x participants) of Smash. In Super Smash Bros. for Wii U it is obtained by clearing Classic Mode at intensity 9.0 without any customizations.

Knuckle Joe's trophy in Super Smash Bros. for Wii U

A martial-arts master, Knuckle Joe can be inhaled by Kirby and his Fighter ability copied. If you summon him, he'll leap toward the enemy nearest you and unleash his powerful Vulcan Jab attack. He'll then finish off his target with a devastating Smash Punch or Rising Break.

When Kirby copies this expert in all martial arts, he becomes a pro at hand-to-hand combat. Release Knuckle Joe in this game, and he'll jump towards the enemy nearest to you and unleash his mighty Vulcan Jab, then finish them off with a devastating Smash Punch or Rising Break!

Knuckle Joe reprises his role as an Assist Trophy, however the knockback of his Smash Punch and Rising Break have been considerably reduced, making his KO potential much weaker overall. Additionally, KOing him now earns a point. Knuckle Joe now faces the screen regardless of direction he turns towards. Training Mode describes his Assist Trophy: Opens with a Vulcan Jab, and then unleashes Smash Punch or Rising Break. He cannot appear on Midgar, Mute City SNES, Norfair, and Suzaku Castle.