Chef Kawasaki (コックカワサキ, Cook Kawasaki) is an enemy from the Kirby universe. 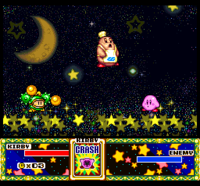 Chef Kawasaki as a mini-boss in Kirby Super Star.

Chef Kawasaki debuted in Kirby Super Star as a mid-boss and the source of the Cook ability, and later reprised this role in Kirby Star Allies. Originally, he had two attacks: using his ladle to grab the player character and cook them with a frying pan, or throwing dishes and silverware as projectiles. When copied, the Cook ability allowed Kirby to draw enemies toward him and cook them in a boiling pot, receiving an food item for each defeated enemy. Kawasaki's appearance as an Assist Trophy in Ultimate combines Kawasaki's ladle grab with Cook Kirby's attack; the latter of which Kawasaki can also use as a Friend in Kirby Star Allies.

Chef Kawasaki appears as an Assist Trophy in Super Smash Bros. Ultimate. He uses a ladle to grab opponents from afar, then puts them in a boiling pot, which launches them and creates food; this is similar to Cook Kirby, Kirby's Final Smash in Brawl. He can also throw plates as projectiles, and he leaves behind a random food item before disappearing. He is one of several Assist Trophies that can be KO'd. Training Mode describes his Assist Trophy: Grabs hold of opponents and mixes them into a pot. Once the broth is ready, he'll make health recovery items! He cannot be summoned in King of Fighters Stadium, Mute City SNES, and Spirit Train.