This article is about the specific celestial body from The Legend of Zelda: Majora's Mask. For other uses of the term "moon", see Moon (disambiguation).

The Moon (月, Moon) is the main threat of The Legend of Zelda: Majora's Mask. By the power of Majora's Mask, it is destined to crash into Clock Town, which will obliterate the town along with the rest of Termina.

The Moon as it originally appeared in Majora's Mask.

The Moon, controlled by Skull Kid under the effects of the titular mask, is the constant threat of The Legend of Zelda: Majora's Mask. Link is given three in-game days (72 hours) to save the land of Termina from the Moon's destruction (however, he can turn back time with the Ocarina of Time). Along with his Fairy companion Tatl, Link sets out to find the Four Giants in each of the temples found throughout Termina.

After they free the Giants from the Skull Kid's curse, the young hero and his Fairy climb atop the Clock Tower on the Final Day to call upon the Giants using the "Oath to Order." One by one, the Four Giants appear and stop the Moon's descent, knocking the Skull Kid unconscious in the process.

At this point, Majora's Mask realizes that the Skull Kid has become useless, so it abandons the imp's body and transports itself inside the Moon. With the Moon now being possessed by Majora's Mask, it becomes too strong for the Giants to hold back and it threatens to continue with its plan of obliterating Termina. While the Four Giants use all of their might to restrain the evil menace, Link and Tatl follow Majora's Mask into the Moon. Inside, Link defeats Majora's Mask and the Moon disintegrates, returning peace to Termina.

If he fails to do so, the Moon crashes into Termina and destroys the world in the "game over" sequence, which serves as the inspiration for the Moon's role as an Assist Trophy in Ultimate. 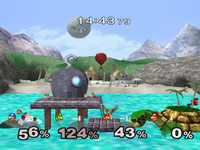 The Moon, in the background of Great Bay.

The Moon appears in the background of Great Bay. After three minutes pass, the moon will begin to fall towards the stage, before the Four Giants push it back up into the sky.

The Moon also appears as a trophy in Melee.

Moon
High in the sky above the Clock Town Tower, a menacing moon slowly sinks toward the city. Shrouded in mystery and feared by all, it threatens to devour everything and everyone in a cataclysm of fire. Strangely, inside the moon is a beautiful, pristine plain broken by a single tree. The moon breaks after Link defeats Majora's Mask.

The Moon, in the background of Great Bay in Ultimate.

The Moon reprises its role as a background character in Great Bay, which returns from Melee. Its appearance has been updated to match its style in The Legend of Zelda: Majora's Mask 3D and Hyrule Warriors.

The Moon approaching the Ω form of Find Mii, in which Shovel Knight, Villager, Samus, and Palutena are standing on.

The Moon also appears as an Assist Trophy. When summoned, it appears as a miniaturized version of itself before respawning in the background and making a collision course towards the area of the stage where the opponent was when it was summoned, becoming more fiery as it gets closer. Once it hits the stage, it deals multiple hits before disappearing, doing 60% damage on a target if all hits connect. If a climatic Final Smash is used while the Moon is out, it will be cancelled. Training Mode describes the Assist Trophy: Falls from the sky and causes a massive explosion when it hits the stage. Can't be KO'd. How long it takes the Moon to reach its target location depends on how far it is from the Moon's spawn position, as it can only move so fast horizontally. This can result in the Moon suddenly dashing from a medium distance to the stage, or appearing to stop approaching entirely and only move laterally in the final phase of its approach.

The Moon also appears as an Ace-class support spirit. It can only be summoned using the cores of Majora's Mask and a support type.