Infantry and Tanks (センシャ＆ホヘイ, Tanks & Infantry) is an Assist Trophy in Super Smash Bros. Brawl and Super Smash Bros. 4, taken from the Nintendo Wars series. They form the bulk of the player's fighting force in every game in which they appear.

They were first confirmed as an Assist Trophy in a gameplay video from Nintendo, but were later confirmed on 14th March 2008 on the Smash Bros. DOJO!!. Infantry and Tanks as seen in Advance Wars.

Infantry and Tanks are the basic direct combat ground units seen in all Nintendo Wars games. Infantry have the least amount of power and low mobility, but can capture enemy properties. Tanks have more power and mobility than Infantry, but are weaker than other vehicles such as the Medium Tank and Artillery.

The Assist Trophy's units are part of the Orange Star army, evident by their titular coloration. Their appearance is based on the map sprites used in Advance Wars, Advance Wars 2: Black Hole Rising, and Advance Wars: Dual Strike.

The sound that plays when Infantry and Tanks are summoned first appeared in the intro for Famicom Wars.[1] 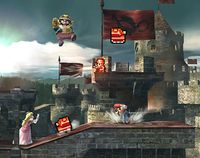 Infantry & Tanks is one of six Assist Trophies that needs to be unlocked before it can be used. When summoned, the units emerge and fire 3D bullets and missiles, which will damage any opposing players. While the Assist Trophy is active, an air raid siren will sound. Much like Excitebikes and Lakitu & Spinies, this Assist Trophy is represented by sprites from a game they appeared in other than Brawl.

Play a total of 300 matches of Brawls or related modes.

Infantry & Tanks
Units first introduced in Famicom Wars, where they fight battles against enemy forces. Infantry are the least expensive to deploy of all units. They're not too strong, but they move well and can capture property. There are two tank types: tank A, which is expensive but has good mobility and firepower, and tank B, which is cheaper but can change battles with sheer numbers.

Infantry and Tanks in Smash 4.

The Infantry and Tanks return as an Assist Trophy and are functionally the same as in Brawl; however, they are now available from the start of the game.

Infantry & Tanks' trophy appears in both versions. In Super Smash Bros. for Wii U it is part of the NES Trophy Box.

Infantry & Tanks's trophy in Super Smash Bros. for Wii U

Two units from the Advance Wars series, infantry are best for capturing bases and tanks for fighting the enemy. If summoned, these two form up on the player who activated them. Don't underestimate them just 'cause they're pixels—the infantry's gun and tank's cannon are formidable.

Two units from Famicom Wars. In this game, they'll appear in pixel form on both sides of the character that called them up. The infantry then fire their guns while the tanks use cannon fire and drive into people. Cute as they are, don't underestimate them or you'll find yourself in a world of hurt!

Infantry and Tanks do not return as an Assist Trophy. However, they do have a spirit based upon their appearance in Super Famicom Wars.

Tank & Infantry did not initially have a Spirit Battle, but gained one via the The More the Merrier Spirit Board event.

Tank & Infantry's Spirit Battle use a Metal Iggy Koopa puppet fighter and two Snake minions respectively and are fought on the Gerudo Valley stage. During the battle, Iggy favors his Clown Cannon move, referencing the missiles the Tank shoots from its cannon.