When using the Clown Cannon, the Junior Clown Car shoots a cannonball out of its mouth. The cannonball knocks back and damages the first enemy it hits.

The endlag of firing a cannonball can be canceled by grabbing the ledge (facing either towards or away). 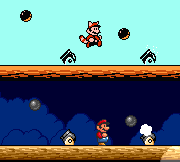