The Mechakoopa marches until colliding with an enemy, knocking them back before exploding. It does 2% when jumping and 7% explosive damage when it explodes for a total of 9%. It deals weak diagonal knockback. If the Mechakoopa walks to a ledge without hitting anyone, it will turn around, and if it isn't activated after about five seconds, it will explode on its own. Bowser Jr. can only have one Mechakoopa out at a time; the move will fail if he uses it again before the Mechakoopa is gone, leaving him with around half a second of lag. In Ultimate, if a Mechakoopa collides with a shield, it will switch off and become an item the opponent can pick up.

If a player picks up the Mechakoopa, it will reset the timer. This can be used for combos or potentially dropping off-stage for gimping opponents. However, the Mechakoopa counts as an item that can be picked up and thrown back at the user, similar to Diddy Kong's Banana Peel. As a result, these plays are not reserved to Bowser Jr., and they're equally effective against him as they are on the opponent.

When a Mechakoopa jumps onto an opponent, it will latch on for a limited period of time before exploding. This can be exploited by the Bowser Jr. player in a number of ways: "extending" throw knockback, combos into forward aerial and confirming smash attacks among other things. This is a massive part of Bowser Jr.'s playstyle, and learning how to use it is imperative to learning the character.

In Adventure Mode: World of Light, Mechakoopa is presumably one of the countless spirits captured by Galeem during his takeover of the universe. Mechakoopa's spirit is located in the Molten Fortress sub-dungeon of The Light Realm.

Mechakoopa uses an army of Tiny Bowser puppet fighters and is fought on the Mushroom Kingdom U stage's Slide Tower layout. Each of the puppet fighters start off with a Bomber, referencing the Mechakoopa's tendency to explode. 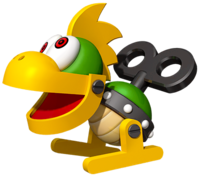 Artwork of a Mechakoopa from New Super Mario Bros. Wii.

Mechakoopas debuted in Super Mario World, appearing in Bowser's Castle and being thrown by Bowser out of his Koopa Clown Car during the final battle. Mario can disable them by stomping them, though they will return to normal after some time. When they are deactivated, Mario can pick them up and throw them; this is the only means of defeating Bowser in that game. They appeared mostly in spin-off games over the years before returning in New Super Mario Bros. Wii.

The Big Mechakoopa would later go on to inspire the Mega Mechakoopa, which first appear in Mario Party 10 in the minigame Mega Mechakoopa's Swing & Stomp and then in Super Mario Maker 2 via the 3.0.0 update. While not explicitly described as such, similarly sized Mechakoopas appear in Mario Kart 8 and its Deluxe re-release in their remake of GBA Ribbon Road, the second course of the Bell Cup.

Prior to Smash, Mechakoopas were never shown to be able to explode. Mario Party 10 became the first instance where a Mechakoopa explodes in the Mario series albeit only from defeat. The more offensive self-destructive instance shown in Smash carries over into Mario + Rabbids Sparks of Hope as one of Bowser’s abilities where he can summon up to five Rabbid Mechakoopas to attack enemies with them exploding on contact if they reach an enemy and will set the enemy on fire if they are upgraded. If they do not reach their target on their first turn, any ally (including Bowser) nearby can also pick them up and throw them at enemies. Bowser’s clone Darkmess Bowser also has this ability as well by using Darkmess Rabbid Mechakoopas.