Bomberman (ボンバーマン, Bomberman), oftentimes referred to as White Bomberman, is the main protagonist of the Bomberman series. 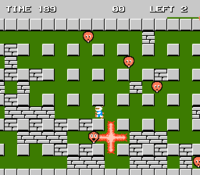 A bomb set by Bomberman explodes in a cross pattern in Bomberman's NES release.

Bomberman’s first appearance was in the eponymous game in 1983, though his most well-known design debuted in Lode Runner. This design would be used for Bomberman one year later in the NES port of the first Bomberman.

White Bomberman is the primary representative of the Bomberman people, the dominant inhabitants of Planet Bomber. Like the other Bombermen, he has the ability to create bombs. There are many incarnations of him represented in the different games of the series, which do not usually keep a particularly consistent description of the character. Generally, he is seen saving his home planet, the galaxy, or even the universe from disaster.

In his home series, the Bombermen battle by setting bombs which then explode into cross patterns. These can not only attack opponents, but also break barriers and crates which contain powerups. However, the Bombermen can also get caught in the blast themselves, requiring them to place bombs strategically and take cover.

Bomberman about to detonate one of his Remote Bombs on Pilotwings.

Bomberman appears as an Assist Trophy character in Ultimate and lays down bombs which he then explodes into cross patterns, similar to his home game. This deals moderate damage to opponents. Bomberman can be KO'd by opponents and even his own bombs, although he avoids the latter most of the time. He may also place Remote Bombs, which he can detonate at any time. They also explode if caught in another Bomb’s explosion.

Bomberman as a Mii costume in Ultimate.

A Bomberman costume for the Mii Brawler was released as DLC as part of Wave 7 on October 13, 2020. Like Sans, Cuphead, and Vault Boy before him, Bomberman appears as a fully modeled character. His "mask" is just his head instead of a mask with the Mii's head visible. Like Vault Boy, he does not come with a music track. The costume's colors change corresponding to the color of the Mii used, in reference to the different palettes in the battle mode in Bomberman games.

Bomberman appears as a primary spirit in Ultimate. He also appears in a Spirit Battle against a Toon Link on Wrecking Crew's Battlefield form. During his battle, explosive items and a hostile Bomberman will appear while Toon Link's fire and explosion attacks are more powerful.