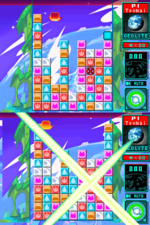 An X Bomb in Meteos, idle (top) and exploding (bottom).

The origin of the X Bomb is muddled. In terms of the bomb's design, it originates from Kid Icarus: Uprising, where it was an item that Pit could throw at opponents, which then fires four balls of energy in a cross pattern that proceed to bounce around. However, the item's behaviour in the Super Smash Bros. series is to deal instant damage along two lines; this behaviour instead originates from the Meteos series (which predates Uprising, notably both games were directed by Sakurai), where the X Bomb would destroy all Meteos diagonal to itself upon detonation. Despite this, the Miiverse post that revealed the item specifically says the X Bomb is not from Meteos.

It is worth noting that the X Bomb from Kid Icarus: Uprising is called a "Cross Bomb" in Japan, which in Meteos is a different item altogether that destroys all Meteos in its row and column. The X Bomb in the Super Smash Bros. series exhibits this behavior simply by rotating differently.

When detonated, the X Bomb releases a cross-shaped explosion that hits multiple times, either aligned diagonally or orthogonally. It can detonate after it is thrown or struck. Unlike most explosive items, the owner is immune to its attack, but only if it is thrown; if struck with an attack, its explosion will damage all players regardless of who struck it. The explosion can be SDI'd out of to avoid being launched by the last hit, on 0.5× launch rate, it can be almost effortlessly be SDI'd out of, in fact, a player can even use a form of travel with the SDI.

The X Bomb is available as a red item in Smash Tour, which allows the player who uses it to start any battle holding an X Bomb.

X Bomb's trophy in Super Smash Bros. for Wii U

This bomb will explode shortly after it leaves your hand, expanding outward in an X-shaped blast that tears through anything in its path. Its incredible power can be a lot of fun, but don't get crazy. Blowing up everything is no way to get ahead in life!

This grenade-like weapon explodes soon after being thrown, making an X-shaped blast that tears through anything in its way. It's a powerful weapon and a lot of fun, but don't make a habit of just blowing up everything in your path. You'll never get anywhere in life that way.