This article is about the video game. For the protagonist of the game who is sometimes referred to as "Kid Icarus", see Pit.

Kid Icarus (光神話 パルテナの鏡, Myth of Light: The Mirror of Palutena) is a platforming video game developed by Nintendo R&D1 and published by Nintendo for the Famicom Disk System in 1986 and the Nintendo Entertainment System in 1987. It is the first game in the Kid Icarus series, the second being Kid Icarus: Of Myths and Monsters, released on the Game Boy. Another sequel for the SNES, Kid Icarus 2, was never released. The game world is loosely based on Greek mythology, with Icarus and Medusa being drawn from myth.

Kid Icarus has been re-released twice: on August 10, 2004, for the Game Boy Advance as part of the Famicom Mini Series in Japan only, and on February 12, 2007, on the Wii's Virtual Console in North America. It was released on the European and Australian Virtual Consoles on February 23, 2007. 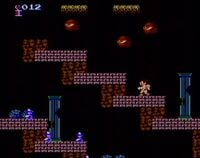 Screenshot from the Masterpiece in Brawl.

Pit's neutral, up and down specials in Brawl (Palutena's Arrow, Wings of Icarus and Mirror Shield) are based on the three sacred treasures from this game, the Arrow of Light, the Pegasus Wings and the Mirror Shield. Pit's Final Smash in Brawl, Palutena's Army, summons centurions to attack. They're abundantly found petrified in Fortresses. Bopping one with a Mallet sends it flying away, and it'll join Pit during the fight against that Fortress' Sacred Guardian. Pit's Final Smash in Super Smash Bros. 4 is called "Three Sacred Treasures", and is based on the treasures mentioned above; more specifically, in their appearance in Kid Icarus: Uprising.

Skyworld is based on the location of the same name in this game. It is the third level. Palutena's Temple also comes from this game. It is where the goddess Palutena lives. In this game, Medusa usurped control of the palace and captured Palutena, prompting Pit to rescue her.

Daphnes, Monoeyes, Reapers, and Zurees appear as Smash Run enemies in Super Smash Bros. for Nintendo 3DS. All of them debuted in this game. Daphnes are Underworld-affiliated enemies. They are depicted as once-docile flowers that were corrupted by a dark spirit, and group in four to attack. Monoeyes are large eyeball-shaped creatures with short tentacles who fly in formations of four and are only found in the Underworld. The Reaper is a durable foe that Pit encounters early in his quest. It appears in every non-Fortress area, barring the Palace in the Sky. The Reaper prowls along a flat path, turning around when the path ends. Once every few moments, however, it will suddenly glance behind to see if Pit's trying to sneak up behind it; it will always turn around if attacked in the back. Should the Reaper see Pit, it'll zip to the closest spot available on it's path and immediately summon four Reapettes. Zuree are encountered in the Palace in the Sky. They simply fly vertically, and are one of the weakest foes Pit will encounter.

The songs "Underworld", "Skyworld", "Title (Kid Icarus)" and "Kid Icarus Original Medley" (known as "Kid Icarus Retro Medley in Smash 4) all come from this game. "Underworld" could be considered a medley of sorts, as while the majority of the track consists of an orchestral remix of the music that typically plays in World 1 of this game (officially known as Underworld), afterwards, a remix of the music that plays when Pit is in the range of the Grim Reaper enemy plays, and then the track ends on a remix of the Game Over Theme before looping again. "Skyworld" is an orchestral remix of the music that plays in the Overworld levels in this game, not the Skyworld as the song name suggests. "Title (Kid Icarus)" is a remix of the music that would play on the Title Screen of this game. "Kid Icarus Original/Retro Meldey" is a medley of music pieces from this game, retained in their original 8-bit format. The track starts with the Title Screen Theme, before transitioning into Underworld, the general Overworld Theme, Skyworld, Dungeon Theme, Stage Clear and Game Over. These segments are ported from the Famicom version of the game, rather than the NES version.