This article is about the first game in the F-Zero series. For the universe known as F-Zero, see F-Zero (universe).

F-Zero (エフゼロ, F-Zero) is a futuristic racing game developed and published by Nintendo for the Super Nintendo Entertainment System. It was the first game in the F-Zero series.

This game appears as a Masterpiece in Super Smash Bros. Brawl and Super Smash Bros. for Wii U. In Brawl, it can be played for 40 seconds and starts in the Mute City track with the Blue Falcon. It must be unlocked by having Captain Falcon join the party in Adventure Mode: The Subspace Emissary, or in other words, beating the "Outside the Ancient Ruins" level. In Smash Wii U, it can be played for 180 seconds and starts the same way as in Brawl. However, it is available from the start. 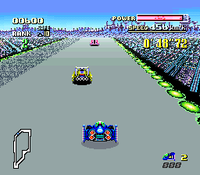 The appearances of Mute City and the Blue Falcon in F-Zero.

Captain Falcon debuted in this game as one of the four playable characters. While he isn't fully seen in-game, the Blue Falcon is piloted by him. However, he is seen in the game's artwork.

Mute City (SSBM), Big Blue and Mute City (SSB4) come from this game. Both versions of the Mute City stage are based on the track of the same name, which is the first track in this game. The SSB4 version looks like the actual game, using the original sprites. Big Blue is the second track.

Samurai Goroh debuted in this game. He isn't seen in-game however, as he instead pilots the Fire Stingray.

Arrangements from this game include Mute City and Big Blue from Melee; Mute City , White Land, and Fire Field from Brawl; Mute City Ver. 3 from Smash 4; and Big Blue (Remix) and Sand Ocean (Remix) from Smash Ultimate, all having originally played on the tracks of the same respective names, as well as the F-ZERO Medley from Smash Ultimate, a medley of the life lost jingle and track themes from Death Wind, White Land, Fire Field, Mute City, Red Canyon, and Port Town.