Pac-Man (パックマン, Pacman) is a maze video game, originally distributed to arcades and later ported to several platforms. The goal of the game is to eat all the Pac-Dots, while avoiding ghosts, who could be defeated with the use of a Power Pellet. After eating all the Pac-Dots in one maze, players would go onto the next level, where the Ghosts were faster, making it harder. This game is where the character Pac-Man originally debuted.

The NES version of the game is available as a default Masterpiece in Super Smash Bros. for Wii U. 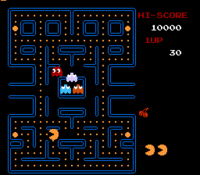 Gameplay in the NES port of Pac-Man.

Pac-Man originated in this game. A number of his moves are Namco references. His neutral special move causes him to conjure fruit, which appeared in this game as bonus items. His smash attacks involve bringing ghosts into the field to strike his enemies. His Final Smash, Super Pac-Man, is based on his sprite from the game, as well as power-ups that allow him to fight enemies.

The stage Pac-Maze in Super Smash Bros. for Nintendo 3DS is based on the maze in this game, even having Inky, Blinky, Pinky, and Clyde as enemies.

The four ghosts, Blinky, Inky, Pinky and Clyde debuted in this game as enemies.

Two tracks based on this game's music, PAC-MAN and PAC-MAN (Club Mix), are available in Pac-Maze and Pac-Land. Pac-Man's victory theme is based on the level start jingle.