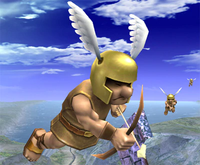 Pit calls to the goddess Palutena for her army of Centurions. An enormous image of Palutena will appear in the sky (which is transparent on most stages, but is easier seen on stages such as Final Destination). The Centurions fly onto screen one-by-one, ramming into other players at incredibly high speeds. When hit by a Centurion, the opponent takes a range of 15-25%. Each Centurion deals a single attack to a character, and then falls in battle. During the course of the attack, Pit is free to move and attack as he pleases, but he is not invincible during his Final Smash. Centurions can be destroyed by enemy attacks; however, due to Centurions' high damage output and speed, it is far more preferable to dodge.

In Super Smash Bros. 4, Pit's Final Smash changed from Palutena's Army to Three Sacred Treasures. However, it is referenced in Palutena's Guidance, where Palutena, now joining the fight and becoming a playable character, refuses to help Pit during their battle.

Palutena's Army
Pit's Final Smash. An image of the goddess Palutena appears, heralding the arrival of Pit's legions, the Centurions. These flying warriors proceed to attack all enemies with fierce savagery. Once a Centurion strikes an enemy, he falls from the sky, never to fly again. Centurions are so fast that dodging them is very hard. Take heart, Centurions! Your deaths are not in vain! 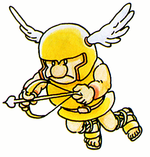 Artwork of a Centurion in Kid Icarus, the basis of their design in Brawl.

In the original Kid Icarus for the Nintendo Entertainment System, Centurions (イカロス, Icarus) are rank-and-file soldiers of Palutena and Angel Land who were turned to stone by Medusa's army. The Centurions play a large role in boss fortresses; in these levels, Pit can find mallets and use them to break open statues scattered around the area, freeing the Centurion trapped inside. When Pit eventually reaches the boss chamber, any Centurions that he rescued will fly in and attack the enemy; this is where the Final Smash concept is taken from. Just as in Brawl, the Centurions in Kid Icarus would perish after being hit a single time, though they could attack repeatedly in the original game.

The Final Smash's name is derived from the NES game's manual: "The Tale of Kid Icarus" describes the losses suffered by Palutena's army against Medusa's Underworld forces, and the "Introducing the Inhabitants In Angel Land" section directly refers to the Centurion as a warrior in Palutena's army. While the Final Smash does not return in SSB4, this name is referenced again in the Centurions' NTSC trophy description in Super Smash Bros. for Nintendo 3DS, which refers to them as standard soldiers of Palutena's Army.