After a brief charging period, the user launches himself in a mainly vertical direction that can be aimed with the directional buttons. Unlike similar special moves, the direction cannot be any downward angle. The standard variant of this move is exclusively a recovery option, inflicting no damage when it makes contact with the foe.

Compared to Pit's old recovery, Wings of Icarus, which was arguably one of the most mobile recoveries in Brawl, Power of Flight does not give Pit as much freedom of movement and acts as a quick single direction recovery, unlike Wings of Icarus which gave Pit full flight for 3 seconds. However, Power of Flight cannot be easily gimped like its Brawl counterpart, as it can be re-used if the user is hit, and gives a massive amount of vertical height, still making it one of the best recoveries in the game. 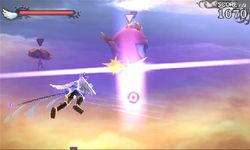 A scene of Pit flying, from Kid Icarus Uprising.

The Power of Flight originates from Kid Icarus Uprising. As Pit cannot fly on his own, Palutena (and Viridi during the Chaos Kin arc) grant him this power. However, it could only be used for five minutes; any longer, and Pit's wings would burn up. This consequence was shown in Chapter 21 when even though he already used the Power of Flight for that much time, he wanted to use it again to save Dark Pit from the remains of the Chaos Kin.

Unlike Pit, Dark Pit had the ability to fly freely in Uprising after his wings absorbed the remains of Pandora. However, he lost the ability in Chapter 22 when Pandora revived herself by using the Rewind Spring. In Super Smash Bros., Pit's Power of Flight is granted by Palutena while Dark Pit's Power of Flight is granted by Viridi as signaled by the colored trails on their wings.