King Dedede hits in front of him with his hammer about 41 units. The first opponent hit will be flung into a caged ring and hit with a barrage of missiles, before Dedede uses his mask to become Masked Dedede and revs up his hammer and spins towards them, launching them with one final hit, dealing 59.6% damage in total. Anyone else in the vicinity of the initial swing will not be caught, but will still take 8% base damage from the hit.

Masked Dedede can be summoned using the cores of Reporter & Wrestler and Hammer Bro. 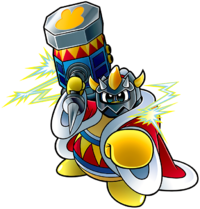 Masked Dedede debuts as King Dedede's upgraded form in the Kirby Super Star Ultra sub-game Revenge of the King. In the game, King Dedede demands a final rematch with Kirby; he steals the Sparkling Stars once again and invites Kirby to a private match within his castle, sending his minions to impede the puffball on his trip. For the final battle, he dons the mask to become Masked Dedede and equips an upgraded version of his classic hammer, outfitting it with jets, missiles, and other tools. Masked Dedede would go on to reappear in games such as Kirby: Triple Deluxe; many variants of Dedede take after this form as well, such as Giant Masked Dedede, Waning Crescent Masked Dedede, and Forgo Dedede.

The caged ring is reminiscent of the arena in which Kirby fights Masked Dedede in Revenge of the King, which itself is the same arena where the two fought in Spring Breeze, this time lined with fencing and devoid of any spectators (except in Revenge of the King, where Bandana Waddle Dee sits alone to cheer on the king). Dedede's New Dedede Hammer is used to fire missiles and perform Hammer Swing, both attacks used during his boss fight. In particular, the missile attack seems to resemble one of his attacks from Kirby's Block Ball.