If next to an enemy, the Villager will pay Tom Nook and his nephews, Timmy & Tommy, to build a house around the opponent. After the house is completed, they cheer, before the house blows up. The explosion launches the trapped victim (and any other opponents close enough), briefly knocks over the Villager, and sends the three tanukis flying. The attack deals a total of 45% damage to trapped opponents. Other opponents who touch the house while it is being built will take 10% damage.

In SSB4 and the initial release of Super Smash Bros. Ultimate, there is a short period of vulnerability just before the explosion occurs. If Villager is hit at this point, his Final Smash will be interrupted and trapped opponents will be freed.[1] This was fixed in version 1.2.0 of Ultimate.

Dream Home's trophy in Super Smash Bros. for Wii U

If you're wanting to buy a house in Animal Crossing, Tom Nook is always happy to help. And it looks like he's expanding his business to Smash Bros. too. If you activate the Villager's Final Smash, Nook will rush in and build a house for you right then and there! One small, very minor difference between this house and ones in the original game? This one explodes.

If you're looking to buy a house in Animal Crossing, Tom Nook is always very happy to help. And it looks like he's expanding his business to Smash Bros. too – just activate the Villager's Final Smash, and Nook will rush in and build a house for you right then and there! Unlike in the original game, though, this one explodes. 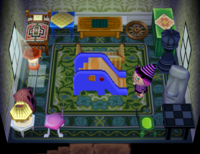 Owning a home is a major aspect of the Animal Crossing series. The player can buy their house from a tanuki named Tom Nook, who can also expand the player's house or renovate the exterior. Timmy and Tommy (also known as the "Nooklings") run a shop of their own in Animal Crossing: New Leaf, where they sell furniture items, floors, and wallpapers, as well as a few other things. In previous Animal Crossing games, however, they were assistants in Tom Nook's store, which offered both of the aforementioned services. The design of the house originates from New Leaf when the player adds another room to the west side of the house. Tom Nook's design comes from the uniform he wears in Nook's Cranny in the Animal Crossing series except New Leaf, while Timmy and Tommy's design comes from their uniform in Nookling Junction in New Leaf. The jingle that plays after the house is complete is the jingle that plays when the player pays off their current home loan in Animal Crossing: New Leaf.