This article is about Ganondorf's Final Smash. For his appearance as a boss, see Ganon. 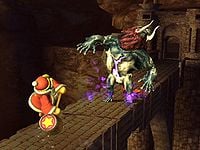 Ganondorf turns into Ganon, a gigantic beast resembling a fearsome boar, then stomps. If caught in the transformation hitbox, the opponent receives 10% damage and is buried. The stomp does 10% damage and paralyzes the opponent, even if they are in midair, with deceptively large horizontal reach in front of him. Beast Ganon then does a dash across the stage that does 47% damage. The move, if the dash hits, is extremely powerful, even strong enough to OHKO in some situations. If the dash misses, but the stomp hits the enemy in the air, they are very powerfully meteor smashed once the move completes, enough to OHKO if they are off-stage. Throughout the transformation, Ganon cannot be attacked. Soon after transforming, Ganondorf returns to his normal form, and appears back at the spot in which he used it. The player will not self-destruct with this move, as Ganondorf will still be in exactly the same position he was in before using it. It is generally ideal for a player to use this Final Smash at the boundary line of the screen, as otherwise opponents can get behind the player, thus avoiding the move.

In Super Smash Bros. 4, the Final Smash is weaker than in Brawl, no longer able to OHKO, and the dash deals 7% less damage (down to 40%). A purple tint is added in the background when the move is activated and Ganondorf roars triumphantly upon transforming back into his Gerudo form.

In Super Smash Bros. Ultimate, the attack functions largely the same, but Ganon's appearance is based on his Ocarina of Time incarnation and has another name as Ganon, The Demon King. Instead of stomping, the Demon King strikes the ground with his twin greatswords to a similar effect, paralyzing and meteor smashing opponents. If the opponent is far enough down when they are struck by the greatswords, Ganon can miss and the opponents will be properly meteor smashed.

The dash's damage was increased to 45%, but the move was overall nerfed again, with the removal of the hitbox that occurred on transformation, the horizontal reach of the meteor smash hitbox being severely reduced to no longer go past his twin greatswords, and the dash now possessing a sourspot at the start that does 35% damage.

Beast Ganon
Ganondorf's Final Smash. When he grabs a Smash Ball, he transforms into a repulsive, evil beast. He'll rampage from wherever he is to the side in a headlong rush. When he begins the move, any character before his eyes will flinch, so try to start the move near other characters.

Beast Ganon's trophy in Super Smash Bros. for Wii U

For Ganondorf's Final Smash, he morphs into a beast and attacks. As soon as he's transformed, he buries nearby fighters in the ground and then stuns them with his roar. Finally, he charges forward, dealing heavy damage and launching anyone in his way. Any foes buried by the first strike are doomed to be hit by the rest.

For Ganondorf's Final Smash, he morphs into a beast and attacks. As soon as he's transformed, he buries fighters nearby in the ground, then stuns them with his roar. Finally, he charges forward, dealing heavy damage and launching anyone in his way. Any foes who are buried by the first strike are guaranteed to be hit by the rest.

Ganon is Ganondorf's original beast form, which debuted in the first The Legend of Zelda game (although misspelled as Gannon) and made several reappearances in later games.

Ganon's appearance in Brawl and Smash 4 is based on his appearance in The Legend of Zelda: Twilight Princess. In that game, Ganon's only attack involves trying to ram himself into Link. There are two ways to stop Ganon's charge: in his human form, Link must shoot an arrow at Ganon to stun him; in his wolf form, he must have Midna grab Ganon's head with her hair and shove him aside. In both cases, Ganon falls to the ground and his weak point, a glowing wound on his chest, is exposed; Link must attack that weak point until Ganon gets back up, and continue with the cycle. The glowing wound is retained in Brawl and Smash 4, but it does not affect Ganon when attacked.

Ganon's appearance in Ultimate is based on his appearance in The Legend of Zelda: Ocarina of Time. Here, he would attack Link by striking with twin swords. To defeat Ganon, Link must strike at the beast's glowing tail, Ganon's only weak spot. After enough strikes, Ganon would crumple to the ground, using his swords for support, which gives Link the opportunity to deal a finishing blow. The Final Smash's new name - Ganon, The Demon King - is a title given to Ganon throughout the Zelda series, particularly in Ocarina of Time. Curiously, Ganon's glowing tail appears more green than in either its original debut or its remake, rather than a more bluish hue.