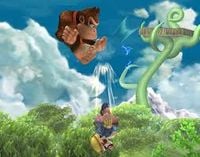 A meteor smash (メテオスマッシュ) is a type of attack in the Super Smash Bros. series that strikes opponents downwards, as opposed to horizontally or upwards like most attacks. Meteor smashes are primarily designed to KO or gimp recovering opponents at an especially low damage. With their potential to take a stock earlier than usual, most conventional meteor smashes are somewhat slow to execute or require sweetspotting.

Some meteor smashes are not meant for edge-guarding and are done only to knock opponents into other hits of the attack. Other meteor smashes can damage only opponents that are on the ground, making them impossible to send targets downwards. These are known as unconventional meteor smashes.

In Super Smash Bros. Brawl, if a meteor smash on a grounded opponent does not induce enough knockback to knock the opponent off the ground, it has a chance of tripping them.

In Super Smash Bros. 4, characters that are meteor smashed onto a floor will bounce back up even from a midair hit. While this allows certain Final Smashes to incorporate downwards finishers and still result in KOs when used on stage, it also allows players to tech even if they were standing on the ground (unless it is an attack with a very high amount of freeze frames, such as Ganondorf's down air). In addition, stronger meteor smashes are now denoted by a unique sound effect upon connection. Meteor smashes also gained the ability to lock opponents if they don't induce enough knockback to knock the opponent off the ground.

In Super Smash Bros. Ultimate, meteor smashes done on grounded-standing characters can no longer be teched. In addition, if a character is meteor smashed with their total launch speed being 3 units per frame (half the speed of when teching becomes impossible) or higher when they reach about 25 units below the camera boundary, they will be KO'd before reaching the lower blast line.[1] This makes most meteor smash sacrificial KOs reliable ways of securing a win when both players are on last stock. Additionally, characters getting meteor smashed when their damage is over 100% now causes a unique knockback animation to play, similar to reeling (this is known as DamageFlyMeteor in the game's files). 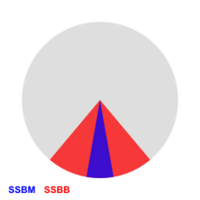 As they hit opponents downwards, meteor smashes cause targets that are not in the air to immediately bounce off the ground they're standing on (as long as they deal enough knockback to put the opponent into tumble), reducing the knockback received by 20%

and thus making such attacks weaker and less reliable KO moves on grounded targets. If the intended knockback does not put the opponent into tumble due to the knockback being too low, it will not even deliver any vertical knockback at all, and instead merely cause hitstun and perhaps tripping starting from Brawl. As a result, only the strongest meteor smashes (such as Ganondorf's down aerial) are viable KO moves in on-stage situations.

In games before Super Smash Bros. 4, if a meteor smash connects on a midair target and they fall towards any surface, the victim does not suffer any sort of bounce effect and will stop their fall, no matter how close to the ground/floor they are on said surface that can block their fall. Because of this, they are essentially completely unviable KO moves if the opponent lands on the ground. In addition to this, the opponent able to tech in this situation with solid timing, which will completely guaranteed survival. In Super Smash Bros. 4, even if the victim is in midair, they will now bounce off the ground regardless if they have sustained a notable amount of damage for the proper amount of knockback power, which is needed for some meteor smashes for programmed reasons (such as most Final Smashes). This means that strong enough meteor smashes can now be viable KO moves against aerial opponents, although teching can still be utilised to survive, at least in Smash 4.

With a handful of exceptions, almost all characters can meteor smash with their down aerial move; this, however, is a risky maneuver if used on opponents attempting recovery, since these attacks cause the character to travel a short distance downward, making the user's own recovery more difficult in certain cases. Some even, like Zero Suit Samus, outright make the user shoot downward, leading to a certain Self Destruct in most cases.

In Melee specifically, meteor smashes are a notable way to dealing with crouch canceling, mainly because crouch canceling is less effective against meteor smashes than moves with horizontal or vertical launch angles. The reason for this is that when a move with an upwards launch angle connects against a crouching opponent and it does not deal enough knockback to put them into tumble, it will lift them off the ground and then immediately put them in their landing animation once hitlag ends. This essentially results in the opponent suffering from a minimal amount of lag after getting hit as they suffer from no hitstun and the only lag they get is the landing lag from landing (which is only 4 frames in most cases), causing crouch canceled moves to usually have a much weaker effect than they otherwise should have on a crouching opponent. As meteor smashes do not lift the opponent off the ground however, the opponent is put into their full hitstun animation. The opponent still suffers from 0.67x the amount of hitlag and knockback compared to if they were not crouch canceling but this still results in the crouching opponent going through a lot more lag than they would against an upwards launching move with an identical amount of knockback. This allows aerial meteor smashes in particular to still be viable combo tools against crouch cancelling opponents as the reduced knockback may not be enough to prevent a combo, which is never the case with upwards launching moves.

Meteor canceling is the act of instantly negating the downwards knockback of a meteor smash by jumping or using an up special after being hit. In Super Smash Bros. Melee, a meteor cancel can be done 8 frames after the hit lag ends, producing a distinctive wind-cutting sound and a sparkle (the character will also briefly glow white); in Brawl, meteor cancels are not indicated and can only be done after 25 frames for most characters, though some characters have their own windows. Additionally in Brawl, meteor canceling can only be performed if the meteor smash puts the opponent into tumble (in Melee, it can be performed regardless of the knockback animation the opponent is put in).

Though, oftentimes an up special input is also a jump input with the control stick and starts both penalties simultaneously, but not always. In a similar vein to the tech penalty, these penalties prevent players from simply mashing said inputs to easily pull off a meteor cancel. Characters can meteor cancel even if they were hit while grounded, though they must have bounced off a ceiling and still be taking the now-downwards knockback to do so.

This penalty was removed in Brawl and the player can even buffer the meteor cancel input to perform it as soon as possible.

Meteor canceling only exists in Melee and Brawl, making meteor smashes in other games functionally equivalent to spikes (although in Smash 4, grounded opponents can tech meteor smashes but not spikes). However, games after Brawl check the same angle range to play a unique sound effect for meteor smashes.

A meteor smash is not to be confused with a spike; while spikes also have downwards knockback angles, they are diagonal enough to not be recognized by the game as a meteor smash, and thus cannot be meteor canceled. Despite this, many smashers use the term "spike" to refer to meteor smashes, with the term "true spike" referring to spikes. Meteor smashes are also not to be confused with a stage spike, where attacks with standard knockback angles can cause opponents to bounce off the underside of a stage and fly downwards, unable to meteor cancel.