This article is about the platform-type element. For the get-up actions, see Floor recovery. For the different types of floor, view Terrain. 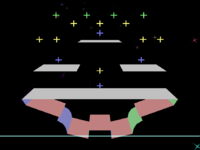 The floor (or ground) is an environmental element appearing in each Super Smash Bros. game and is anything that a character can walk/dash on and/or stops the character from falling (as in being KO'd). All floors can be buried into and teched on, and any attack executed while standing on the floor is a ground attack. Some moves can only interact with characters on the ground as opposed to in the air. A few floors can cause damage and vertical knockback, as with the track in Mute City or Port Town Aero Drive (while the cruise platform is moving), or can be set up to cause quake damage, as with Venusaur's or Metagross's Earthquake attacks. In Melee, sending the opponent towards a damaging floor and KOing him or her with it earns the player a "Kiss-the-Floor KO" bonus. Acid and lava also count as damaging floors; acid appears in Super Smash Bros.'s and Melee's Planet Zebes and Brinstar stages, respectively, while lava appears in Brawl's Norfair stage. Spikes are also damaging floors and appear in Melee onward as hazards. In Melee, spikes deal heavy electric damage and knockback and can be found in Ganondorf's Target Test and Race to the Finish (later areas). In Brawl and Smash 4, spikes do heavy slashing damage and have set knockback.

In Super Smash Bros. 4, floors no longer halt the momentum of a character taking knockback by forcing them immediately into a downed position. Instead, momentum is redirected with a rebound bouncing in the opposite direction, functioning much like a stage spike with the floor instead of a wall. This means that a meteor smash can KO off the top blast zone from rebounding off of the floor.