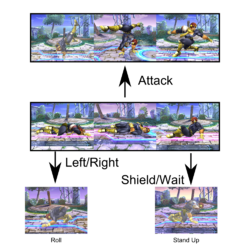 Floor recoveries are a class of moves that can be performed by a character who is sitting or lying on the ground. Attacking in this state is generally called a "get-up attack", while other moves that return the character to a normal standing state are generally called "get-up animations". In all cases, a recovering character is given invincibility frames. All characters are capable of consuming recovery items like Food before getting up if these items are nearby. The list of options is as follows:

The strategies involving these techniques are often collectively referred to as Wakeup. The downed fighter usually has a brief moment to think of when and how to return to a standing position. While having several major differences, Wakeup is often used in conjunction and sometimes interchangeably with Okizeme.

Skilled players usually attempt to avoid being in the lying position by teching when they hit the ground, because their opponent can capitalize on their vulnerable position. They try to vary the floor recovery they use each time, in order to avoid becoming predictable and be punished by repeatedly using the same floor recovery. Many attacks, such as Mr. Game & Watch's down throw tech-chase in Brawl, rely on reading the opponent's floor recovery to be continued.

In Super Smash Bros. 4, equipment with the Insult to Injury bonus effect can multiply any damage dealt to prone opponents by 1.4x.