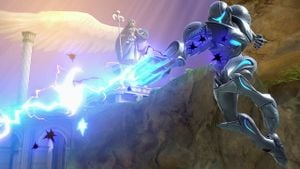 A grab aerial (空中ワイヤー, Midair wire; also known as a grab air or zair) is a technique introduced in Super Smash Bros. Melee that allows a character to use their extended grab implement as an aerial attack or tether recovery (wall grapple in Melee). Grab aerials are performed in the same way as grabs, either by simply pressing the grab button while in the air, or by holding a shield button and then pressing an attack button.

Grab aerials quickly extend forward and strike opponents with weak damage and knockback (except Lucas's in Brawl, which doesn't hit opponents). They tend to have more range than other aerials, which makes them useful for spacing (especially out of a short hop) and surprising opponents with their high speed, and are sometimes effective for starting combos. Despite their name and input, grab aerials cannot grab opponents, though attempting one while holding an item will drop the item instead. All grab aerials except Luigi's can be also be used as a tether recovery or wall grapple, though they cause helplessness in Melee if they fail to attach to a wall.

Grab aerials are considerably more useful in Brawl and onward than in Melee due to their lack of ending lag, the absence of L-canceling and the existence (only in Brawl) of the landing lag glitch which affects other attacks. Prior to Ultimate, characters with it can cancel an air dodge with a grab aerial, which in Brawl and SSB4, allows one to use a grab aerial or tether recovery without dropping a held item. Starting in Brawl, grab aerials do not cause a character to go into a helpless state, allowing for repeated usage more easily, as well as being able to safely use the move off of the stage for edge guarding.

In Brawl, if a character uses their grab aerial right before getting KO'd off the upper blast line, the KO blast will be seen with the usual colourful explosion seen on other blast lines, but it will be facing upwards off the screen, and appear small and incomplete.

In Smash 4, all grab aerials have 8 frames of landing lag. If they are used by pressing a shield and attack button at the same time, however, they will instead have the landing lag of an air dodge (which lasts 21 frames); as such, using grab aerials to cancel air dodges is riskier when close to the ground.

Grab aerials are one of the few attacks in the Smash series that are not universal. The characters that possess a grab aerial also possess a tether grab.