This article is about Ivysaur's appearance in Super Smash Bros. Brawl. For other uses, see Ivysaur.

Ivysaur (フシギソウ, Fushigisou), stylized as IVYSAUR in Europe, is a playable character in Super Smash Bros. Brawl in a sense; it is one of three Pokémon that are played through Pokémon Trainer, the other two being Squirtle and Charizard. Ivysaur originated from the original Pokémon game for Game Boy as the first evolved form of Bulbasaur, one of the initial Pokémon the player can start out with at the beginning of the adventure.

Unlike a majority of the characters, Ivysaur has different voice actors, which depend on the region and language. The voice actors respectively are as follows:

Ivysaur is perhaps the most difficult Pokémon to play out of the three. It cannot overpower its foes with deadly force like Charizard can, nor can it overwhelm foes with a high rate of attack like the nimble Squirtle. Furthermore, Ivysaur's major flaws prevent it from applying the same amount of pressure in a matchup as Pokémon Trainer's other Pokémon.

KOing is one of Ivysaur's big problems. Ivysaur's two most KO-capable smashes are powerful but slow. Its forward smash deals high knockback, but has rather high startup and ending lag, while its up smash, despite being the strongest up smash in the game, suffers from high startup lag and a difficult-to-land hitbox that doesn't cover much horizontal distance. Ivysaur's forward aerial, its other vertical finisher, only begins to KO at around 130%. A sweetspotted Vine Whip can make for a superb surprise KO, but its diagonal trajectory makes it difficult to land, and leaves it helpless and vulnerable to punishment in midair. Ivysaur can pop off a dash attack for a quick and rather powerful headbutt KO, but the dashing animation makes the attack highly predictable and is easily blocked by shielding. Getting KOs is worsened by the Pokémon Trainer stamina trait, should Ivysaur get tired, decreasing the knockback on all of its attacks.

Ivysaur's special moves are generally mediocre. Bullet Seed has the potential to deal upwards of 30% to an enemy, but to be knocked into the seeds, the opponent must be hit by a tiny hitbox on Ivysaur's sides at the start of the move, making it difficult to set up. The seeds are also easily SDI'ed out of, and the high ending lag leaves Ivysaur vulnerable to punishment if the move misses. Razor Leaf is Ivysaur's only ranged projectile, but its unpredictable flight path, low knockback, high startup and ending lag, and slow speed render it ineffective for purposes such as camping and harassing.

Ivysaur is burdened with its weakness to fire-based knockback. While Squirtle is the only character in the game to do water-based knockback (discounting Mario with his F.L.U.D.D.), there are many more characters than just Charizard who utilize fire-based knockback in their more powerful moves (R.O.B., Ike, Luigi, Snake, Mario, Captain Falcon, Mr. Game & Watch, etc.), and have an easier time KO'ing Ivysaur as a result (one of the most notorious examples of this is Luigi with his Fire Jump Punch, who can KO Ivysaur at as low as 40%. Snake can also KO Ivysaur with a fully-charged side smash at 5% at the ledge.) It also has quite a long rolling dodge animation, making it vulnerable to punishment by an opponent.

Ivysaur's worst weaknesses, though, are its atrocious air game and recovery. Ivysaur has a tough time using aerials against opponents offensively, and is frequently at risk to being pushed to the edge while airborne. Its back aerial deals extremely low damage and poor knockback, and its neutral aerial has very short range and can easily be SDI'ed out of. His up and down aerial have small vertical hitboxes; combined with the fact that using these moves midair causes a change in Ivysaur's momentum, these moves are very difficult to land. While his up aerial delivers powerful vertical knockback, his down aerial is an extremely weak meteor smash that doesn't deal meaningful knockback until very high percents, making it generally ineffective as an edgeguarding tool. Ivysaur's best aerial, his forward aerial, only covers the area directly in front of it, leaving it with few meaningful options while in the air. Its poor aerials, combined with its very slow air speed, severely cripple its aerial game. Furthermore, Ivysaur's recovery is considered among the worst in Brawl. While its midair jump is decent, Ivysaur relies on its tether recovery, Vine Whip to return to the stage and this move can easily be edgehogged by opponents simply grabbing the ledge. This leaves Ivysaur with perhaps the shortest recovery in the game, and completely devastates its ability to recover safely from offstage, often dying to quick gimps; A launch offstage is usually enough to nearly guarantee a successful edgeguard on the Pokémon.

It does have a good grab game, however; Ivysaur's vines give it one of the best pivot grabs along with Yoshi, and its running grab sports decent range as well (the standing grab, however, has surprisingly low range and a laggy "miss" animation). Once having grabbed, Ivysaur can use either a down or forward throw to maintain stage control.

In summary, Ivysaur's difficulties KO'ing opponents, poor air game, laggy attacks, short reach, and atrocious recovery leave it as the clear runt of the litter among the three Generation I starter Pokémon. Competitive players argue that if Ivysaur was a standalone fighter, due to its lack of prominent strengths and debilitating flaws, it would be a contender for the worst character in the game, competing with bottom-tier characters such as Link, Jigglypuff, Zelda, and Ganondorf with some players putting it as the single worst character in the game.

An excerpt from the main theme of the Pokémon series. It is shared with Pikachu, Jigglypuff, and Lucario. 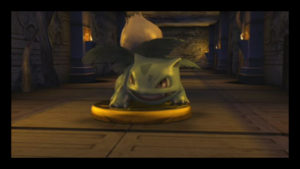 Ivysaur as a trophy in The Subspace Emissary.
Main article: Pokémon Trainer

While in The Ruins, Lucas and Pokémon Trainer discover Ivysaur in trophy form at the end of a torch-lit hallway. Pokémon Trainer then throws a Poké Ball at the trophy to capture Ivysaur, adding it to his team alongside Squirtle. It is unknown why Ivysaur is a trophy, and why it is in the ruins.

Note: Ivysaur is only featured in one event that does not include the Pokémon Trainer.

Ivysaur's trophy is obtained by clearing Classic Mode with the Pokémon Trainer and must deliver the final hit to Master Hand with Ivysaur.

A Seed Pokémon that is the evolved form of Bulbasaur. It has a flower bulb on its back, the weight of which has made it develop strong legs and hips. If the blossom gets too big, the Pokémon can't stand on two legs alone. At a certain level, it evolves into Venusaur. When this happens, the bulb absorbs nutrients and blossoms into a large-petaled flower.