Kyogre (カイオーガ, Kyogre) is a creature in the Pokémon media franchise.

Kyogre is a Water-type Legendary Pokémon and the version mascot of Pokémon Sapphire and, in its Primal form, of Pokémon Alpha Sapphire. Kyogre is categorized within the Pokédex at #382 as the "Sea Basin Pokémon". It is the embodiment of the sea, and its originally unique ability Drizzle is able to summon rain on the battlefield.

Kyogre can learn Hydro Pump by leveling up, although unlike Smash, the move deals damage. 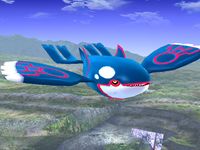 Kyogre flying above Battlefield in Brawl.

Kyogre made its Smash debut in Brawl. When summoned from a Poké Ball, Kyogre starts floating in the air and shooting water from its mouth with Hydro Pump, the same move used by Blastoise in Super Smash Bros. and Super Smash Bros. Melee. While Kyogre's body does damage on contact the water it shoots just pushes back its targets, like Mario's F.L.U.D.D. and Squirtle's Water Gun, and is useful for stopping recoveries. However, this attack cannot hit any player that is hanging on a ledge. Different from F.L.U.D.D. or Water Gun, it's extremely strong and can easily push a character past the blast lines for a KO. Like all other legendaries except Latias and Latios, Kyogre appears rarely.

Kyogre
A Sea Basin Pokémon. It brought about heavy rains, which formed seas and relieved droughts. It is usually found slumbering at the bottom of an ocean trench. Its attack Sheer Cold is a technique so powerful, it causes any opponent it strikes to faint instantly. In battle, it causes clouds to form and drenches the area in rain. It once fiercely battled Groudon.

Kyogre returns with the same role, now being also able to appear out of the newly introduced Master Ball. Its general function is unchanged, but it moves faster, stays in play longer, and has more KO ability.

Kyogre's trophy appears in both versions. In Super Smash Bros. for Wii U it is part of the Legend of Pokémon Ruby & Pokémon Sapphire Trophy Box.

Kyogre's trophy in Super Smash Bros. for Wii U

This Water-type Pokémon roughly resembles an orca whale, though its large fins also look a bit like hands. Be wary of its Hydro Pump attack, which is capable of sending you flying off the stage. Even worse, it will chase after you, making it even harder to recover from the attack.

This orca-like Water-type Pokémon is known for the distinctive shape of its fins and the red markings along its body. It will use Hydro Pump to send fighters flying off the stage, and then proceed to chase after them to make recovering from the attack a nightmare.

Kyogre returns as a Poké Ball summon once again, however, Kyogre's Hydro Pump has been greatly enlarged and goes slightly faster than before, with Kyogre lasting on the stage longer than it had in Super Smash Bros. for Wii U and 3DS. Rather than disappearing suddenly like in previous titles, Kyogre will now fly upwards once finished.

Kyogre, along with its Primal form, also appear as spirits.