Abomasnow (ユキノオー, Yukinooh) is a creature from the Pokémon franchise.

Abomasnow is a Grass/Ice-type Pokémon introduced in Generation IV, and is categorized within the Pokédex at #460 as the "Frost Tree Pokémon". Its typing is unique to it and its previous form Snover, from which it evolves once it reaches level 40. Its main Ability, which was unique to it prior to Generation VI, is Snow Warning, which summons a hailstorm when it is sent out into battle. Abomasnow also received a Mega Evolution in Generation VI.

Blizzard is a special Ice-type move with 110 power (120 before Generation VI) and 70% accuracy with a 10% chance of inflicting the Freeze status on the targets. While inaccurate, it gains perfect accuracy during a hailstorm, such as the one automatically summoned by Abomasnow's Snow Warning. Abomasnow can learn it at level 47 or, like all other Ice-type Pokémon, by TM14 or TR06.

Ice Punch is a physical Ice-type move with 75 base power and 100% accuracy with a 10% chance of inflicting the Freeze status on the target. Abomasnow learns it at level 1, so it could only learn the move via the Move Reminder or a Move Tutor at the time of Smash 4's release; in Pokémon Sword and Shield, it can also learn the move upon evolving from Snover or via TM04. 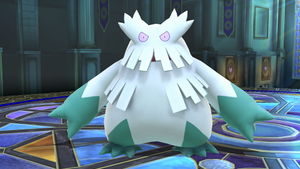 Abomasnow can be summoned by a Poké Ball. It remains stationary and uses Blizzard, circling itself with a damaging icy vortex which draws opponents in. After two usages of Blizzard, it dashes forward and attacks with an Ice Punch, doing 15% damage and freezing the target. It performs this routine two times before disappearing.

The Abomasnow trophy appears in both versions. In Super Smash Bros. for Wii U it is part of the Pokémon Diamond & Pokémon Pearl Trophy Box.

Abomasnow's trophy in Super Smash Bros. for Wii U

A solitary Grass/Ice type, Abomasnow loves to live in the snowy mountains, though it occasionally mingles with people as well. In Smash Bros., it uses a combo of Blizzard and Ice Punch, punishing anyone who gets too close. It can change direction when attacking, so sneaking up on it from behind won't work!

Abomasnow is a Grass- and Ice-type Pokémon said to live the quiet life in snowy mountains, but it's been known to mingle with humans too. It can whip up blizzards to attack anyone who strays too close, and it can throw a powerful Ice Punch either straight in front or back over its shoulder, so there's nowhere to hide!

Abomasnow can neither be summoned on Mute City SNES nor Tomodachi Life.