Jigglypuff is fought here in its unlocking battle in the 3DS game.

The basic structure of the stage consists of a main platform which reaches the bottom of the stage and two raised soft platforms on both sides.

However, at times, N's Castle rises in the background. This summons two ramps which crash into the sides of the stage, impacting characters they hit, then becoming solid platforms that lead at angles up to the side blast lines. Afterwards, Reshiram or Zekrom will fly in to attack with either Fusion Flare or Fusion Bolt respectively. The ramps will disappear either as destruction by the dragon, or else after a set time when the dragon leaves.

Reshiram can attack by summoning flames, which can:

Zekrom can attack by shooting a ball of electricity, which can:

Whimsicott, Milotic and Shaymin can also appear in the background. However, they have no gameplay effect and just fly away, with Shaymin changing from its Land Forme to its Sky Forme.

In Super Smash Bros. for Nintendo 3DS, the Ω form is set on the main hard platform of the normal form. No background Pokémon appear. N's Castle remains risen in the background permanently, and no stage transitions occur.

In Super Smash Bros. Ultimate, the main platform of the Ω form and Battlefield form is similar to SSB4's Ω form; however, it does not extend below the blastline and is resized and reshaped to match Final Destination and Battlefield, respectively. The three soft platforms of the Battlefield form are based on the ones in the normal form.

With hazards off in Ultimate, Reshiram and Zekrom do not appear and unleash their attacks, and N's Castle never rises in the background and activates the ramps. Whimsicott, Milotic and Shaymin can still appear, but still have no effect. 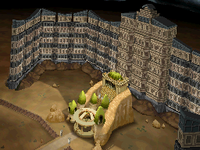 N's Castle rising up behind the Pokémon League in Pokémon Black and White.

N's Castle is the base of operations for Team Plasma in Pokémon Black and White, and the setting for the final storyline battles of the game. The castle, which surrounds the champion's chamber in the Pokémon League and could be accessed from there during the player's initial visit to the League, is where Reshiram or Zekrom can be caught depending on the version. The caught Tao dragon may fight alongside the player if he or she chooses in the battles against N and then Ghetsis. After defeating Ghetsis, the castle is no longer visible and cannot be visited again.

The ruins of the castle appear in Pokémon Black 2 and White 2, which could be accessed from Victory Road during the post-game storyline. There, the player can encounter N, and may face him in a battle. After the initial battle, the player may visit him once per season and fight weather-based teams depending on the season.

In Smash 4, the stage is universally banned, as the Pokémon in the background can sometimes interrupt gameplay.

In Ultimate, the stage is often considered a counterpick with hazards off, as it removes the hazardous Pokémon. Although it appears similar to Pokémon Stadium 2, its main platform is more narrow, and it has an irregular underside, while its blastzones are less wide but unusually tall. The irregular underside can cause certain characters, namely those with teleport recoveries, to bounce on the rock wall and self destruct if recovering low hugging the stage; this has caused many tournaments to decide to ban Unova Pokémon League altogether, although this has been a minor point of contention among the competitive community. Since the release of Small Battlefield, which provides a more standardized medium size "biplat" stage, Unova Pokémon League has steadily fallen in popularity and now sees next to no usage in tournament rulesets. 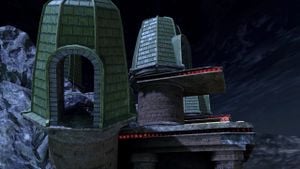 The tower with the unmodelled inside walls, viewed with the in-game camera 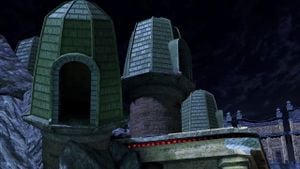 The same tower in the Ω form, correctly modelled