The stage resembles Battlefield in its layout, as it consists of a flat main platform with three overhanging soft platforms, all three with the same size. The middle platform is immobile, while the two on the side gently move up and down in no particular correspondence. They can rise to be as high as just under the highest platform, or drop to the point where they sink through the level, thereby making them impossible to stand on.

On the bottom of the stage there is a solid pillar which characters can wall jump on. It is not possible to pass underneath the stage due to this pillar.

With hazards turned off in Ultimate, the left and right soft platforms do not move. This is similar to the stage's Battlefield form, though the pillar underneath remains. 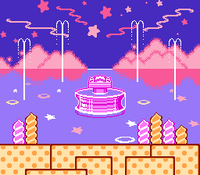 The Fountain of Dreams as it originally appeared in Kirby's Adventure.

This stage is loosely based on the Fountain of Dreams located on Planet Popstar in Kirby's Adventure and Kirby Super Star's Milky Way Wishes. It is powered by the Star Rod (which is absent from the fountain itself in Smash due to its reoccuring role as an item) and gives good dreams to the inhabitants of Dream Land. In this stage, the overall design of the Fountain of Dreams and its surroundings are different than how they appear in either game; however, this stage would later become the basis for how the fountain and surrounding area appear in future Kirby games after Melee's release, such as in Kirby: Nightmare in Dream Land, Kirby Super Star Ultra, and Kirby Fighters Deluxe.

In Kirby's Adventure, the Fountain of Dreams is where Kirby fought and defeated King Dedede after he stole and broke the Star Rod into seven pieces. Kirby then restored the Star Rod and put it back into the fountain; however, this freed the evil Nightmare, a dark creature that corrupted the fountain, which King Dedede had sealed away by breaking the Star Rod. Afterward, Kirby fought and defeated Nightmare using the Star Rod. In Kirby Super Star's Milky Way Wishes, there are multiple Fountains of Dreams on Popstar's neighboring planets; Kirby awakens them in order to summon the Galactic Nova to grant a wish.

Fountain of Dreams is a neutral stage in competitive play, and one of the most popular stages for competitive play, due to its general balance: the moving platforms can prevent camping, and the shape of the edges of the stage prevent characters from getting stuck underneath them. Additionally, the pillar on the bottom of the stage allows characters who can wall jump to improve their recoveries, while simultaneously preventing players from stalling by traveling underneath the stage.

Fountain of Dreams benefits characters who gain safer recovery mixups due to the ability to wall jump and/or the very low position of the lower blast zone relative to the stage, such as Mario. It also benefits characters who have largely horizontal KO options but are more vulnerable to being KOed off the top, such as Peach, due to the high ceiling and narrow side blast zones. Fountain of Dreams hinders characters who rely greatly on precise movement, as the moving platforms can mess up the timing of their wavedashing or wavelanding, and the small size of the base stage prevents them from utilizing their dash dance to the fullest potential. This stage is considered excellent for Jigglypuff and Marth, as they realize all of the above advantages of the stage; Marth, in particular, can control space much more effectively due to the small stage size. It is considered Captain Falcon's worst stage, and also one of Fox's and Falco's weakest stages, although some top Fox players do not mind this stage.

Despite its balance in singles matches, the Fountain of Dreams is often banned in doubles tournaments, due to its small size for doubles matches and the water reflection effects potentially causing framerate drops, especially when the Ice Climbers are present. Framerate drops disrupt patterns that rely on knowing exact frame timing, which are commonly used by experienced players.

Fountain of Dreams, including its Battlefield form and Ω form, is usually banned in all modes due to framerate issues, particularly with Wario Bike turning around on the water, which disrupts patterns that are based on exact frame timing. Also, with hazards off, the base stage is considered to be too similar to Battlefield. Most of the framerate issues were fixed in Ultimate as of version 8.0.0, meaning the Battlefield and Ω forms are usually no longer banned, though the status of the regular version remains unchanged and a few issues persist with Wario Bike, leaving legality up to the tournament organizer most of the time.

In Melee, the teeter drop (or T-drop) is a technique specific to Fountain of Dreams. To do it, teeter on either edge of the stage, then turn around and press shield. This will cause the character to edge slip and quickly grab the ledge.

Fountain of Dreams's trophy in Melee

Fountain of Dreams
This mystical fountain in Dream Land uses the power of the Star Rod to create a gush of pleasant dreams that flow like water. The dreams then become a fine mist and drift over the land, bringing peaceful rest to one and all. It's been confirmed that there are identical facilities on other planets near Pop Star.