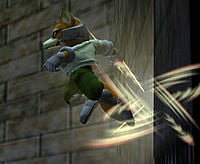 The wall jump is a technique unique to certain characters. Introduced in Super Smash Bros. Melee, wall jumping consists of the character momentarily clinging to the wall, then turning away, and finally jumping back. It is performed by touching a wall and then pressing the control stick or d-pad in the direction opposite to the wall. In Brawl, it can also be performed by pressing the jump button when touching a wall. One cannot wall jump forever, as the height gained from each successive wall jump decreases until they stop gaining any height at all. In Melee, a wall jumping character experiences a short period of intangibility at the moment they kick off the wall, until they are able to perform another action. This is no longer the case as of Brawl, but the intangibility still applies when the character performs a wall jump out of a wall tech, although this intangibility would later be removed in Ultimate.

Additionally, all characters can perform a wall jump directly after wall teching. This technique is often used by players recovering against an edge-guarder.

There is some debate as to whether or not Super Mario Bros. is the first instance of wall-jumping in Nintendo games, as in that game the technique was a glitch (which may have become noteworthy enough to be included as a real mechanic later on in Super Mario 64); however, the Mario series is generally given credit for popularizing the move.