This article is about the stage element referred to as edges. For for other uses of the name Edge, see Edge (disambiguation). 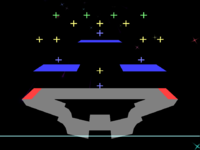 Marth grabbing the ledge of Final Destination in Brawl.

Link stealing a ledge from Mario in Super Smash Bros. for Wii U.

An edge (also known as a ledge, coded internally as cliff) is any part of a stage from which one can grab or tether (not to be confused with a wall grapple). Edges are often found at the ends of a stage's main platform. The edge therefore becomes an important element in the battle between an edge-guarder and a recovering opponent. Some stages can have many edges or none at all; on most tournament legal stages, there is an edge on both ends of the stage (e.g. Final Destination).

The majority of edges on hard and semisoft platforms can be grabbed. Some edges cannot be grabbed, and so make recovery from that side of the stage significantly more difficult. Examples of ungrabbable edges include the moving platform of Peach's Castle (in Smash 64 only), the lower sides of Summit, and all Stage Builder blocks aside from the standard one (and even then, only if the edge is at least two blocks above a floor). Generally, soft platforms do not have grabbable edges, the main exception being those on Norfair.

In the original Super Smash Bros. and in Melee, a character cannot grab the edge if facing the opposite direction, with some exceptions, such as when using Falcon Dive and Spinning Kong in Melee. In Brawl, Smash 4, and Ultimate, characters can grab an edge behind them, but with a range of 40% less than in front. Characters will automatically grab a nearby edge while in the air unless the player is actively holding down on the control stick or D-pad. Multiple characters cannot hold onto an edge at the same time, with the exception of the Ice Climbers in Brawl and Ultimate, where both climbers belonging to one player can grab the same edge. When a character grabs an edge, they will briefly become intangible. The amount of intangibility gained depends on the game and if certain conditions are met. In Melee and Brawl, if a character lets go of the ledge, they will keep their intangibility. This is the basis of ledgestalling (see that article for more detailed analysis of how edge-grabbing works in Melee). However, in Smash 64, Smash 4 and Ultimate, the intangibility immediately ends once a player lets go of the ledge by pressing down or back on the control stick, preventing characters from having indefinite ledge intangibility.

The physics of grabbing edges have undergone a massive overhaul in Super Smash Bros. 4. In this game, air time and damage of a character affect how much intangibility is earned by grabbing the ledge; a healthy character with a high amount of air time earns more intangibility. Damage no longer affects a character's recovery animations, so they always use their fast ones. A character can also be stopped from grabbing a ledge for 55 frames if they are hit, forcing most characters to predictably delay their recovery in order to sweetspot the ledge. Finally and arguably most importantly, trying to grab an edge that another character is already grabbing will gently remove them from the edge and then grab it, removing edge-hogging, and grabbing an edge a second time without touching the ground or being hit will not grant intangibility, negating planking. Grabbing and stealing edge while someone hangs from it as well is commonly known as edge trumping.

In Ultimate, grabbing an edge consecutively without landing or taking hitstun decreases the intangibility frames of subsequent edge recovery options, with a reduction factor of 0.8× for the second edge grab, 0.5× for the third one, and no intangibility at all from the fourth one onward. Additionally, in the same vein as Ike's Aether in previous games, characters can only grab an edge up to six times under these conditions; subsequent attempts will still show the visual effect for an edge grab if the character comes in contact, but without it actually happening. These mechanics further reduce the effectiveness of planking strategies. 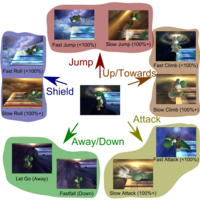 When hanging onto an edge, the player has five possible actions:

When a character's damage is lower than 100%, the character is considered "fresh", and is able to climb back onto the stage from the edge rather quickly. However, at percentages of 100% and above, the character can be considered "tired", and climbing becomes a harder task. As a result, all edge actions aside from letting go have two possible animations: one with the character performing the action in a fluent and fast manner, and another with the character doing so in a clumsy and slow manner. The fast and slow animations are often noticeably different in execution, such as a quick flip kick versus a slow trip kick, or a quick roll versus a slow crawl.

The slow actions were removed in Smash 4.

The amount of intangibility gained upon grabbing an edge differs between games, but is generally a fixed value. This changes starting in Smash 4, where both air time and percentage have an effect.

The following behaviors arise from the system in Smash 4 and Ultimate:

It is possible to get up from an edge and become actionable before the intangibility gained from grabbing said edge runs out. This window of time is known as grounded actionable ledge intangibility (often shortened to GALINT). A common way to gain GALINT is the ledge dash in Melee and Ultimate, which involves dropping from an edge, then jumping and air dodging at the right time depending on the character to bypass the get up animation and be actionable sooner than anticipated. The window to perform this technique and the amount of possible GALINT varies by character, as some are slower in the air than others and thus have less GALINT.

Advanced techniques exist to achieve more GALINT, either by becoming actionable sooner or gaining more intangibility frames. Examples include performing a no-impact land to bypass landing lag as well as Peach in Melee grabbing an edge with Peach Parasol before the parasol opens, which changes her collision box in such a way that a precise ledge dash will grant Peach up to 9 frames of GALINT instead of her usual 0.

The amount of damage a character has affects how long they can hang on an edge before automatically dropping off and beginning to tumble.

These durations can only be altered in SSB4 with Lingering Edge and Hasty Edge equipment; nothing else has any effect, such as character properties or item-provided statuses.

Ledgetrapping is the act of limiting only six options to leave the ledge and granting coverage of them: regular get up, get up attack, ledgeroll, ledge jump, drop down ledge attack, or staying on the ledge. This is an effective strategy for players who are trying to read their option by using a move that covers most of their choices. A simple way of ledgetrapping for all characters is shielding at the ledge as it covers four out of the six ledge options, two of which must be reacted upon (regular get up, get up attack, ledge roll, and jump). If the ledgetrapper shielding gets one of the options, they can grab the opponent and send them back past the ledge for them to try again.

A two frame punish is a mechanic introduced in Smash 4 that allows a potential edge guarder to attack an opponent attempting to recover without even leaving the stage or hardly coming off. When a character grabs the ledge, there are two frames (or 1/30th of a second) of tangibility directly before they grab the ledge. This was most likely added to compensate for the removal of edge-hogging, as it still allows players to be punished for going for a ledge grab, even though it is more difficult and less consistent than edge-hogging. The two frames of punish time don't appear if the character recovering grabs the ledge not by coming up, but by going past the ledge and grabbing it on the way back down, or just jumping and not using their up-b, though both can lead to punishment regardless. If the recovering character uses a teleport recovery (like Sheik's Vanish) starting from above the ledge, the two vulnerable frames don't apply and there will be no room for punishment.

Tilts and Z-Dropped items are generally the best tactics to make use of the frames. Any attack that goes below the ledge will work, but they're the least punishable. The downward half of Kirby's Final Cutter and Cloud's Climhazzard can act as an extremely powerful meteor smash or sacrificial KO if landed during this period.

The edge sweet spot is the range around a fighter from the edge of a platform at which a character can still grab the edge. This is normally in reference to a recovery move such as an up special move, but is also active when a fighter is falling downwards and not using an aerial. This distance varies for each character and each type of recovery move, with some recovery moves having large edge sweet-spots, while others cannot sweetspot at all. In addition, some fighters have notoriously large edge sweet spot hitboxes, particularly in Smash 4, which has led to many players jokingly referring to the feature as "magnet hands". All characters have two hitboxes, one in front and one behind them, usually towards their head area, which when overlapping with the ledge will result in the character grabbing the ledge. Some special moves only enable the front edge sweet spot hitbox to be active, while some do not allow either for either part of or the entire duration of the special. Notable recovery moves that cannot edge-sweetspot are Captain Falcon and Ganondorf's up specials in Melee, along with Little Mac's Rising Uppercut and Cloud's Climhazzard (if he is not under Limit Break status). Typically, when attempting a recovery, it is more useful to aim up special moves for the ledge in an attempt to sweetspot the ledge (if possible), rather than recovering to the stage. The edges on Battlefield in Melee are quite infamous for being difficult to grab on to.

"If you get close enough to an edge, your character will grab on to it. Pressing left or right, jumping, or pressing the attack or shield button will let you climb up off the edge in a variety of ways."