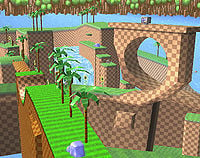 The stage consists in a single piece of land with a bridge on its left, walk-offs at both sides and a depression in the middle. The ground of the middle part is split into three sections that are susceptible to attacks, and the sections will crumble away if they sustain enough damage (125

damage), transforming the center of the stage into a pit. The sections will naturally break after a random amount of time between 90-150 seconds, regardless of how much damage it has taken. The broken parts regenerate after 20 seconds.

Occasionally, checkpoint lampposts randomly spring up. They are normally blue, but when attacked they turn red and start spinning: in this state they are able to hurt players other than the original attacker. They only deal 10%

damage, but cause decent knockback with KO capabilities. After a few seconds, spinning lampposts stop and can be attacked again. They disappear on their own after a while.

The background features a giant shuttle loop with a 1-Up monitor above it. Occasionally, Tails, Knuckles, and Silver run along it.

In Super Smash Bros. for Nintendo 3DS, the Ω form is a flat version of the normal form's ground that has the checkpoints, walk-offs, and crumbling terrain removed. The stage also extends below the blast line.

In Super Smash Bros. Ultimate, the main platform of the Ω form and Battlefield form is similar to the Ω form in SSB4, however, it does not extend below the blast line and is resized and reshaped to match Final Destination and Battlefield, respectively. The three soft platforms of the Battlefield form are reminiscent of the grassy checkered soil of the ground and are unique to this form.

The layout is the same as the standard stage. However, Point Markers will not appear and the ground will never break.

Green Hill Zone, as it originally appeared in Sonic the Hedgehog.

Green Hill Zone debuted as the starting stage in Sonic the Hedgehog. Located on South Island, it is an area consisting of distinctively checkered ground with a grass surface and a lush biome, including palm trees and multiple flower species. Various other structures are found, such as shuttle loops and totem poles, as well as bridges, tunnels, and swinging platforms that connect the various parts of the stage. The conventions and aesthetic of Green Hill Zone have since been reiterated multiple times throughout the Sonic series, either in the form of its reappearance, or it serving as the basis for a stage with a similar theme, including Windy Hill Zone.

Green Hill Zone also introduced various elements now prominent in the series. Crumbling ground is a piece of terrain often found at the edge of cliffs, and quickly deteriorate once stepped on. A Checkpoint Marker is an object activated upon running past it, momentarily spinning the orb on its top and then making the orb glow red. It records the player's score and time, and maintains their progress in an Act should they lose a life.

The layout of the Smash stage is loosely based on the beginning stretch of Act 1, with the starting area and raised cliff with a Ring Monitor being modeled offscreen, and the stage itself being a condensed version of the following stretch of the level, in which there is a wooden bridge followed by a curved divot in the ground. However, the crumbling floor and Checkpoint Marker do not appear in the part of the level the stage is based on.

On March 17th 2009, the BBR announced that the stage should be banned, as opposed to its former status as a counterpick, and the stage has since been universally banned in tournament play. Many players take issue with Green Hill Zone for its extremely campy nature: the most effective strategy when fighting here is to camp the signposts, which have a centralising effect due to their significant defensive power for an already highly defensive game, can severely elongate the flow of the match. Another major issue with the stage is its deep slope design, which, besides being awkward to fight on, can create a cave of life effect since players can DI and tech into the ground. Furthermore, both sides of the stage have permanent walk-off edges, favoring chain throws or simply camping the edge; the frequent absence of a lower blast-line also negates any off-stage play.

Green Hill Zone is universally banned for many of the same reasons as in Brawl. While turning off stage hazards mitigates some issues like camping, other issues are left unadressed.

The error on the DOJO.