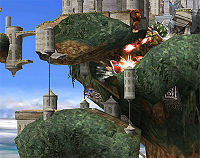 A cave of life on Temple.

A cave of life is an unofficial term for an enclosed area in a stage where characters can survive to much higher percentages than usual. These areas have an impassable platform above the area, and can contain other walls, which allows characters to tech and survive potentially fatal blows. Even without teching, characters will bounce off the ceiling, which absorbs some of the knockback, and allows the character to survive longer than usual.

Caves of life are considered a degenerative aspect of a stage for competitive play. Besides allowing characters to survive attacks well beyond what is usually possible, they often provide powerful camping positions due to their enclosed nature and the difficulty of KOing characters within them, and they produce an overcentralisation on teching. As such, most stages with them are universally banned from tournaments, and stages with more minor caves of life are rarely legal.

These are the stages in the Super Smash Bros. series that contain caves of life.

The stage provides rather minor caves of life that are caused by two floating, moderately sized platforms that are impassable. However, both are temporary due to the frequent rotating of the stage, and they do not have as large of an effect that other caves of life do.

True caves of life are present in the lower-right and lower-left corners of the stage. Although a majority of the stage features Danger Zones that can damage or KO players, it is possible to tech these surfaces, thus creating further caves of life.

The structure in the center creates a cave of life. The structure takes damage when characters get launched into it, making it temporary.

The stage contains impassable platforms that create caves of life. These platforms can be temporarily destroyed by destroying the railings supporting the platforms, making the caves of life temporary. Despite having these caves of life, this stage was sometimes allowed in tournaments as a counterpick in early competitive Brawl.

The numerous, impassable platforms of the stage create prominent caves of life throughout the entirety of the stage.

One stop that the platform can make places the road over top of it, creating a tall but wide cave of life. There is a lot of space to angle characters away from attackers and to wind up far above the platform due to how high up the ceiling is. Shy Guys will occasionally drive through the area, interrupting cave of life combos or causing earlier KOs. The platform will eventually start moving again, removing the cave of life but the now-moving road can add on some extra damage.

Solid platforms will occasionally appear on the right side, forming small, temporary caves of life. Sometimes ceilings can appear, creating a stage-wide cave of life.

The bricks on the left of the stage are unbreakable and create a cave of life that stretches to the blast line. Super Smash Bros. 64 doesn't have ceiling techs, limiting potential escape options.

The bricks in the stage create multiple caves of life throughout the stage. However, since the bricks are breakable by attacks and hitting into them from below, none of the caves of life are permanent.

Both versions of the stage have caves of life due to the numerous bricks, similar to the bricks in Mushroom Kingdom. The bricks are breakable and both variants of the stage scroll, making most of these caves of life temporary. Owing to the presence of the brick ceiling on 1-2, however, at least one cave of life is almost always available.

On the bottom area of the map, down and to the left of the swinging platform. The various placements and angles of the surfaces can result in unplanned trajectories, causing those trapped in the cave of life to escape or remain trapped if they don't angle themselves correctly—a poor angle may result in the character escaping downwards towards a blast line. The Ultimate Chimera is able to appear here, allowing someone to survive being chomped in Brawl.

The lower-left corner of the stage is a large cave of life. The upper-left corner can also become a cave of life when the floating platform descends. The right side also features small caves of life, though they are not as potent as the others.

The fire transformation has a very small cave of life on the left side of the tree. No more than one character can fit underneath though, and characters are easily hit out of it, greatly hindering its effectiveness.

In Brawl, the windmill in the water stage produces an unusual cave of life. Depending on how the blades are rotated, it can create a very effective cave of life that will send the opponent straight down to the stage when it is not teched.

Despite the presence of caves of life, Pokémon Stadium is considered legal in both Melee and Brawl tournaments, though only as a counterpick in the former. This is because the stage's transforming nature puts a limit on how long a player can remain in the cave.

In the area created after Viridi drops the Reset Bomb has a small box-shaped area which creates a cave of life effect. The ceiling of this area can be destroyed, making this cave of life temporary. This part of the stage is removed if playing online in For Fun mode.

Some areas of the stage have impassable ceilings and walls, which create a cave of life effect. The scrolling nature of the stage, however, makes them all temporary.

The lower area has two connected caves of life with one being smaller than the other. All of the platforms are breakable. Attacks with hitboxes close to the ground can break the platforms, destroying the cave of life. The small cave of life to the left is harder to get a lot of use out of; the left-most platform is angled allowing characters to be launched out, the low, breakable ceiling results in a short lived cave of life for taller characters.

The underground tunnel area produces a large and permanent cave of life. A third of the ceiling of the area can be temporarily destroyed by either Dialga or Palkia, temporarily reducing the cave's size.

The bottom area produces a cave of life that lasts for most of the stage's cycle, except for when the standable area in the bottom area falls below the water's surface; icicles that fall from the ceiling of this cave can also knock opponents out of it.

The lower area of the stage is a large cave of life and is the most well known; Nintendo Power referred to it as a "fight club". Besides having a ceiling, the area has a wall on the upper left, a sloped ceiling to the lower right, and a slope on the upper right, which provides both a floor and ceiling to tech or bounce off of. The large amount of walls and the overly large size of Temple allows characters to survive in this area to extraordinary damages even without teching. With teching, characters can survive longer here than they feasibly can in any other non-custom stage.

This stage has two small caves of life created by the trio of rotating blocks, which are impassable when not spinning. Since the blocks spin when hit, neither cave is permanent.

Placing large amounts of walls with little space between them can cause players to easily create caves of life; No KO is a particularly extreme example of this.