From SmashWiki, the Super Smash Bros. wiki
(Redirected from Shadow)
Jump to navigationJump to search 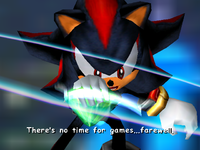 Shadow the Hedgehog, like Knuckles the Echidna, is a rival of Sonic the Hedgehog. An artificially-created hedgehog known as the "Ultimate Lifeform", he made his first appearance in Sonic Adventure 2 as an antagonist who becomes an anti-heroic protagonist as the game progresses. Since his debut, he consistently holds second place as the most popular character in the franchise, trailing the eponymous character. Unlike his heroic counterpart, Shadow is a much darker character, willing to do whatever it takes to reach his goals. In later games, Shadow appears often appears as an anti-hero with inherently good intentions, even if his methods are violent and ruthless. He features in his own self-titled game, Shadow the Hedgehog, released in 2005.

Shadow was created several decades before the events of Adventure 2 by Dr. Eggman's grandfather, Gerald Robotnik, on the Space Colony ARK. He was the result of a successful government medical project in collaboration with the leader of the Black Arms, Black Doom, called Project Shadow, which had the goal of finding a way for life to be immortal. Gerald specifically wanted to find a cure for the terminal illness Neuro-Immune Deficiency Syndrome (N.I.D.S.), which his granddaughter Maria had contracted. Shadow and Maria would soon become friends on the colony. Soon after the project's completion, the government began to fear Shadow's power, and attempted to erase the project from public records. The military unit G.U.N. assaulted the colony and either imprisoned or killed all involved, including Maria. Before being fatally shot by a G.U.N. soldier, Maria managed to seal Shadow in a escape pod, leaving him to helplessly watch before his descent to Earth. Shadow has traumatic memories of this incident.

Fifty years later, Dr. Eggman reawakens Shadow in order to reactivate the Eclipse Cannon, a weapon of mass destruction built into the ARK. Shadow agrees to help, but only to achieve his goal of exacting revenge on humanity for killing Maria. Sonic and his friends attempt to stop this plan, but both parties are eventually forced to work together to prevent the ARK from crashing into Earth. With the help of Amy Rose, Shadow realizes that Maria's wish was not to destroy humanity, but rather to "give them a chance to be happy." When the Biolizard, the prototype Ultimate Lifeform, fuses together with the ARK to become the Finalhazard, Shadow partners with Sonic and uses the power of the Chaos Emeralds to become Super Shadow, fighting to stop the new threat. The final battle results in Shadow sacrificing himself and falling to the planet from orbit, presumably killing him.

Shadow reappears in Sonic Heroes, where he is found in one of Dr. Eggman's containment chambers by Rouge the Bat. He has no memories of his previous life, which leads both others and himself to question how he survived. He also encounters E-123 Omega, a creation of Eggman who rebelled and now seeks revenge on the doctor. The three decide to join forces in pursuit of Eggman, with Shadow hoping to find answers about his identity. Along the way, the group finds a collection of androids that look exactly like Shadow, sealed in similar chambers. This raises the question of whether this Shadow is the original being, or an android replicant.

The plot points from Heroes are further explored in Shadow the Hedgehog. Still missing most of his memories, Shadow is approached by Black Doom, who promises answers in exchange for following his orders in the name of world domination. There are ten possible endings depending on the choices the player makes, with Shadow's conclusion varying between being the original or an android. However, there is a "true" ending where Shadow realizes that it does not matter who he was, but rather who he currently is. This "true" ending clarifies how Shadow survived, regardless; Eggman confesses that he found Shadow's lifeless body and rescued him, confirming that he is the same Ultimate Lifeform that Gerald Robotnik created. After the conclusion reached in this game, Shadow would continue to play roles in future games, mostly as a supporting character with a few playable appearances.

In the Sonic series, Chaos Control is a technique that allows the user to warp through space and stop time through the manipulation of the fabric of space-time. The user needs at least one Chaos Emerald, and the strength of Chaos Control is increased with each Chaos Emerald added until being maxed out with all seven. Shadow was one of the first to utilize the technique, with other characters also learning how to perform it later on. In Sonic Adventure 2's two-player mode, Chaos Control can be used by Shadow to stop time and "freeze" the opponent while he moves at normal speed. Chaos Control can also be used to slow down time in Sonic Heroes, and when fighting against bosses in Shadow the Hedgehog. In the Super Smash Bros. series, Shadow appears as an Assist Trophy and uses Chaos Control to slow down time for opponents, but not for the fighter who summoned him. In most games, such as Sonic Adventure 2 and Sonic Heroes, Shadow is shown using the green Chaos Emerald to perform Chaos Control, which is the same one he uses in Smash. 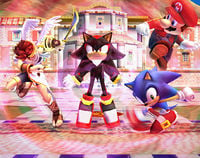 Shadow appears as an unlockable Assist Trophy character in Brawl and uses his Chaos Control ability to slow down everyone except the summoner (similar to the effects of the Timer item, though with a shorter duration, and without the risk of it backfiring). Shadow the Hedgehog is unlocked when the player unlocks Sonic as a playable character.

In Brawl, Shadow the Hedgehog is voiced by Jason Griffith (who also voices Sonic) in the English version of the game since his own game and the anime Sonic X, and Kōji Yusa in the Japanese version, who has been continuously voicing Shadow since his debut in Sonic Adventure 2.

Shadow The Hedgehog is a black hedgehog who resembles Sonic. He was created by Dr. Eggman's grandfather, Gerald Robotnik, to be the ultimate life-form. Not only does he look like Sonic, but he has equal abilities. He has great skill with the space-time warping technique called Chaos Control. To reach his goals, he'll use any means necessary.

Shadow the Hedgehog is a black hedgehog who resembles Sonic. He was created by Dr. Eggman's grandfather, Gerald Robotnik, to be the ultimate life-form. Not only does he look like Sonic, but he has equal abilities. He has great skill with the space-time warping technique called Chaos Control. To reach his goals, he'll use any means necessary.

Shadow as an Assist Trophy in Super Smash Bros. for Wii U.

Shadow retains his role as an Assist Trophy that slows down time in SSB4. His distortions are more visually apparent in this game, appearing clearly in the foreground. His own visual aesthetics were also altered to be just as bright as in his home series, as well as his mouth's placement being more to the side of his muzzle instead of right below his nose, matching Sonic. This time, he is voiced in English by Kirk Thornton, who succeeded Jason Griffith in voicing him in the Sonic series since 2010 with Sonic Free Riders; Kōji Yusa reprises his role in Japanese and just like Sonic, Shadow has gained voices in other languages as well. His non-Japanese voice clips are recycled from Sonic Generations.

Shadow's trophy in Super Smash Bros. for Wii U

Engineered to be the ultimate life-form by the brilliant Professor Gerald Robotnik, this black hedgehog appears very much like Sonic. He has a dark side, however. In Smash Bros., he uses Chaos Control to warp space-time, slowing every fighter down except the player who summoned him.

A black hedgehog created by Professor Gerald Robotnik to be the Ultimate Lifeform. Though he looks a lot like Sonic, he's ruthless and will do anything to achieve his goals. In this game, he uses Chaos Control to warp time and space, slowing down everything around whoever summoned him.

Shadow returns as an Assist Trophy and now holds the green Chaos Emerald. As in Brawl and SSB4, Shadow performs Chaos Control to slow down the opponents of the fighter that summoned him. In addition to slowing down opponents, near the end of Chaos Control he will trigger a brief second phase that completely stops the opponents. His visual distortion is green and is much more apparent with lightning also striking around him. He cannot appear on 3D Land, Flat Zone X, Magicant, Midgar, Mute City SNES, Pac-Land, Spiral Mountain, Super Happy Tree, and WarioWare, Inc.

Shadow appears as two different primary spirits. Super Shadow can be obtained by enhancing the Shadow the Hedgehog spirit at level 99.

Shadow's Spirit Battle uses a Sonic puppet fighter and is fought on the New Pork City stage's battlefield form. During the battle, Shadow appears as a hostile Assist Trophy while the Timer item appears, referencing Shadow's Chaos Control ability, which allows him to slow down and temporarily freeze time while holding a Chaos Emerald.