Homing Attack (ホーミングアタック, Homing Attack) is Sonic's neutral special move and is a basic attack in many of his games. 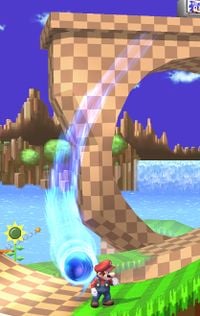 When used, Sonic curls up into a ball, hovers momentarily while slowly moving upwards, then shoots towards the opponent closest to him, causing 8% damage at its freshest and goes down by 1% as it stales, up to 3% at its stalest, when it connects. If there are no characters within range of the attack, instead of homing in on the closest target, Sonic will simply shoot downwards at a diagonal angle. Whether or not the move hits or misses, Sonic will stall after it is used, leaving him open, making it easily punishable in team battles or even in a one on one if it connects on an opponent at low damage percentages. In Brawl, this move can be used an unlimited amount of times in the air, thus making it a good move to use against anybody who tries to edge guard Sonic, as well as making a good edgeguarding tool itself. If two Sonics (or Kirbys with Sonic's ability) attack each another with this move, they will slowly jump upwards until they reach the top of the screen, in a manner similar to the Luigi Ladder. It also possesses a unique quality in that it tries to hit the opponent's side facing away from Sonic by traveling over them. This property means that it only hits effectively when the opponent is moving away from him on the ground, or traveling towards him in the air. This was all changed in Smash 4 so the Homing Attack can only be used once before landing and takes the shortest distance to the opponent, which often leads to attacking their front side. In Ultimate, the move is much stronger and has much more utility. The player can execute the move significantly faster, making it excellent at extending mid-air combos. In addition, the player can alternatively charge the move much longer, greatly increasing the damage near 20%, doing more shield damage, and even KOing at very high percentages.

In Brawl, the Homing Attack can be used to stall indefinitely underneath platform stages by shooting into the underside of the stage. When Sonic is about to use Homing Attack, tap the control stick or d-pad left or right, depending on the way the player wants to go, and then press the special move button. Sonic will change his direction, and attempt to home on an enemy in that direction, or, if there is no enemy in range, dash downwards at a diagonal angle. As this constitutes stalling, usage of this technique for this purpose is banned in most tournaments. 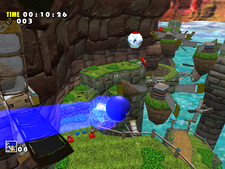 The Homing Attack made its debut in Sonic Adventure as a way to attack enemies, and became a staple move in the Sonic series and one of Sonic's go-to and most iconic moves. It is Sonic's new main method of dealing with enemies and solving puzzles. Sonic had a similar attack in Sonic 3D Blast, known as the Blast Attack, which he obtains after collecting a Gold Shield. With the Gold Shield, Sonic could home in and charge towards enemies. Unlike the Homing Attack, it does not lock on to the target.

One of Sonic's custom moves, Stomp, is a reference to a move of the same name that debuted in Sonic Unleashed, and reappeared in Sonic Colors and Sonic Generations. As its name implies, Sonic dives downward with a double-foot stomp at a fast speed. In Super Smash Bros. for Nintendo 3DS / Wii U, however, Sonic performs it by slamming the ground with a Spin Attack, making it more similar to the Bounce Attack from Sonic Adventure 2.