The Metroid (メトロイド, Metroid) is a species of extraterrestrial creature and the namesake creature of the Metroid universe. 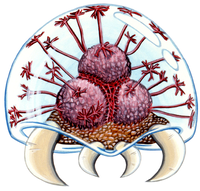 Official artwork of a Metroid from Metroid II: Return of Samus, which was the basis of the Melee trophy design.

Metroids first appeared in Metroid as an enemy that played a crucial part in the game's storyline, and have appeared as enemies in every Metroid game since, with the exceptions of Metroid Prime Hunters and Metroid Dread. The creatures are a parasitic species that use their gigantic teeth to drain energy from their prey. They are resistant to most forms of standard weaponry, but are exceptionally weak to cold temperatures, so Samus can destroy them with her Ice Beam or Ice Missiles. If one grabs onto her, the only way for Samus to shake it off is to drop a bomb while in her Morph Ball form, which deals damage and detaches it from her. Metroids are also known for their ability to adapt and grow in any environment; while most Metroids are seen as their jellyfish-like larval form, they become larger and more bestial as they develop, culminating in the draconian Queen Metroid.

Metroids were created by the Chozo to prey on the X Parasites, and became native to the planet SR388. The word "Metroid" means "ultimate warrior" in the in-universe Chozo language (the real-life etymology of the word is a portmanteau of "metro" and "android"[1]). However, the Metroids' parasitic nature makes them a constant target for Samus's archenemies, the Space Pirates. They introduced Metroids as invasive species to other planets, such as Zebes and Tallon IV. Samus was eventually commissioned by the Galactic Federation to travel to SR388 and put them into extinction, although she spared a single hatchling that imprinted on her. She returned this specimen to the Ceres Space Colony for research, where it was subsequently stolen by Ridley. After his retreat to the Space Pirate base on Zebes, the hatchling was eventually killed by Mother Brain, seemingly leading to the species' total extinction.

However, Samus's actions caused the Metroids' natural prey, the X Parasites, to multiply and thrive once more. After being infected by an X Parasite, the Federation saved her life by injecting her with the Vaccine "Metroid", which was created using the hatchling's DNA. This procedure infused her with Metroid DNA, giving her characteristics such as immunity to X Parasites and a weakness to cold temperatures. During her mission at the infested Biologic Space Labs Research Station, she discovered that the Galactic Federation had begun a Metroid breeding program. Upon this discovery, she set the ship on a collision course to SR388 and escaped, destroying the last remaining Metroids upon impact. Because of her Metroid-fused DNA, Samus herself is the last remnant of the Metroids, having become the "ultimate warrior" of the Chozo.

In their Smash appearance, Metroids act the same as they do in the Metroid series, grabbing players and dealing damage. They can also phase through platforms, similar to Phazon Metroids in Metroid Prime 3: Corruption. The form most commonly depicted in the Super Smash Bros. series is the Metroid larva, although other forms have made appearances in the series. The fully-matured Queen Metroid (using its appearance from Metroid: Other M) and Phazon-mutated Metroid Prime have appeared as trophies; a Tallon Metroid appears as a sticker; and Dark Samus (a reincarnated form of the Metroid Prime) is an Assist Trophy in SSB4 and a fully playable character in Ultimate.

Although it does not appear in-game, the Metroid is mentioned in Samus's profile. 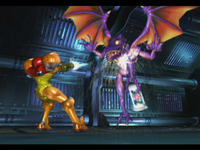 The baby Metroid's cameo appearance in the opening movie.

The baby Metroid from Metroid II: Return of Samus makes a cameo appearance in the opening movie of Melee. As a reference to the beginning of Super Metroid, the Metroid is contained in a capsule held by Ridley, who is fighting Samus aboard the Ceres Space Station.

The Metroid appears in Melee as a collectible trophy, unlocked as one of the 200+ trophies that can be collected randomly during normal play, such as in the Trophy Lottery and throughout the various Single-player Regular Matches.

Metroid
A parasitic life form that can absorb all types of energy, Metroids have strong resistance to most conventional weaponry. To defeat them, Samus Aran had to freeze them with Ice Beam shots and then blast them with missiles. Mochtroids, which look like Metroids, are weaker, with fewer internal nuclei. 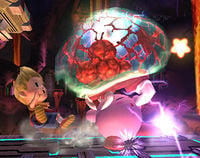 The Metroid as an Assist Trophy in Brawl.

Metroid is featured in Brawl as an Assist Trophy. When a Metroid is released, it will attempt to latch onto an opponent's head, slightly immobilize them, and sap their health. It can be shaken off by moving about rapidly (or with a simple air dodge), upon which it may seek another victim. It moves in a rather inertial way (like Super Sonic and Volt Tackle), floating about the stage lazily. It can also pass through walls. The Metroid does damage much like a faster version of the flower effect, except that it makes characters flinch; most attacks will be interrupted unless they come out on frame 1. This makes it very difficult to accomplish anything while the Metroid is attached, and it causes CPU opponents to use their up special move repeatedly while attempting to recover. However, if recovery moves like Spin Attack are used repeatedly while a Metroid is latched, they can cause a high amount of vertical movement, possibly even pushing the character past the upper blast line. Like Starfy and Lakitu, the Metroid can be attacked, but it will only flinch away a little bit and then attempt to find a victim again. If the victim is KO'd, the Metroid will be KO'd as well.

Metroid
A bioengineered life-form found on planet SR388. Metroids attach to organisms and drain life energy. The Galactic Federation commissions Samus to eliminate them, but Space Pirates try to harness their power. One of the few ways Samus can kill Metroids is by shooting them with the Ice Beam and then shattering them with missiles. The Metroid's cry is chilling and indescribable.

The Metroid returns in both versions of the game as an Assist Trophy, functioning the same as in Brawl. 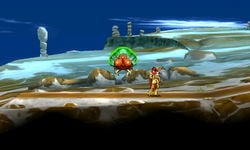 A Metroid in Smash Run.

Metroids appear as enemies, exhibiting the same behavior of their Assist Trophy incarnation. True to the Metroid series, they can be defeated more easily with ice attacks.

A Metroid can appear as a random event. It wanders around the board and steals stat boosts from the first player that touches it: whoever catches it can then retrieve the stolen stats. Retrieving one's own stolen stats is one of the Challenges.

Metroid's trophy in Super Smash Bros. for Wii U

First discovered on planet SR388, this floating life-form grows by absorbing the energy around it. It is incredibly durable but extremely weak to cold. In Smash Bros., a Metroid will grab a rival by the head and drain energy. If you get grabbed, shake it off by pressing left and right!

Mysterious floating life-forms, discovered on the planet SR388, that absorb energy from other living beings. They're tough, except when they're cold. In this game, they'll try to attach themselves to fighters' heads and drain their energy. Press all the buttons you can to shake them off!

Queen Metroid's trophy in Super Smash Bros. for Wii U

Have you ever met people who thought Metroid was the name of the game's heroine? Adding Queen to the title would just make it worse. But if you show them what a Queen Metroid REALLY looks like, they won't make that mistake again in a hurry. Metroids are fearsome creatures, and the queen is the nastiest of the lot.

Have you ever met someone who thought "Metroid" was the name of the game's heroine? Putting "Queen" in front might just make it worse. But if you show them what a Queen Metroid REALLY looks like, they won't make that mistake again in a hurry. Metroids are fearsome creatures, and the Queen is the nastiest of the lot.

The Metroid returns once again as an Assist Trophy, functioning the same as in the previous installments. However, it can now be defeated with freezing attacks, like in Smash Run. Training Mode describes its Assist Trophy: Latches on to an opponent and steals their energy. It can be killed if frozen. It cannot appear on 3D Land, Boxing Ring, Bridge of Eldin, Cloud Sea of Alrest, Coliseum, Living Room, Mario Galaxy, Mute City SNES, New Pork City, Onett, Tomodachi Life, and Tortimer Island.

The Metroid also appears as an Ace-class support spirit.

In Adventure Mode: World of Light, the Metroid is presumably one of the countless spirits captured by Galeem during his takeover of the universe. The Metroid's spirit is located in the volcanic section of The Light Realm.

The Metroid's Spirit Battle uses a Ridley puppet fighter and is fought on the Brinstar stage's Battlefield form. During the battle, the Metroid appears as a hostile Assist Trophy. Also, the floor is sticky and Ridley's melee blows will heal them when they hit, referencing the Metroid's ability to latch onto their victims, slow them down, and absorb their life energy. 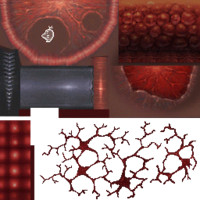 A Mr. Saturn sprite is hidden in the texture for the Metroid in Brawl.