This article is about Samus' appearance in Super Smash Bros. For the character in other contexts, see Samus Aran.

Samus (サムス, Samus) is a starter character in Super Smash Bros. As in her games, she fights inside the hi-tech, powerful Varia Suit, giving her a strong endurance to attacks as well as varied options for attack. Her sound clips are entirely "technologic" sounds.

She is ranked 8th on the current tier list, placing her at the top of the C tier. Samus is a heavy, yet floaty, character with decent horizontal recovery. She has arguably the highest raw damage output in the game, courtesy of her many options for attacking, and due to the long range of her moves, she is able to space them well. The high damage output of her moves also translates well to her power, having many powerful finishers like her Charge Shot and her neutral and back aerials. Despite her weight, her floaty nature also allows her to not be comboed as easily as others.

However, Samus has many glaring weaknesses. One of them is her overall slow mobility: while she has a fast dashing speed, she is among the least mobile characters in the air due to her floatiness. Samus also has no reliable grounded or aerial options for approaching. Another weakness is her very sluggish frame data, with some of her moves having lots of ending lag. Altogether, this gives her an almost non-existent approach. While she seemingly has many combo starters due to said moves having low knockback, she has a low amount of combos due to her moves' ending lag. Lastly, she lacks a quick and easy-to-land KO move and relies on reads and predictable finishers to KO.

The few things that save Samus from being the worst character in the NTSC-U version are spacing, recovery, and the fact she is hard to combo. Even so, she still has mediocre matchups, as well as terrible representation and results in North America. However, she is ranked higher in the Japanese version at 7th, due to the different gameplay mechanics having an impact on her moveset, and she has a notable smasher in Jouske, who achieves great results with her (despite refusing to travel to North America). 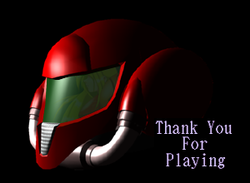 Samus is a tall heavyweight character that is also rather floaty, an uncommon trait for most heavyweights. She has the 4th fastest dashing speed, but combined with the 4th slowest air speed, second slowest falling speed, and a long and slow roll heavily decrease her mobility. She has decent range and also has two projectiles, including Charge Shot, which covers a great distance and is fairly powerful, being quite useful for keeping opponents at bay, but requires a large amount of charging to have KO power, and Bomb, which can aid her horizontal recovery. Spacing works quite well with Samus, with her forward tilt and back aerial being useful. However, she has a high and slow short hop. Her grab is one of the three tether grabs in the game, giving it excellent range, but has sixty frames of ending lag, making it the laggiest grab in the game. Her back throw is a powerful KO throw and is also tied with Pikachu and Donkey Kong's back throws for the most damaging throw in the game. Her biggest flaw however is her notorious inability to perform a zero-to-death combo with her regular moves, though to compensate, she escapes many zero deaths with her floaty weight and Screw Attack. Her dash attack can set up tech chases, leading into a down tilt and a down air to kill; however, this is not a true combo at all percents. In addition, her down-air may not kill heavier characters such as herself or DK.

Overall, most of Samus's moves, while doing over 10% in most cases, have a high amount of ending lag. As a result of that, she lacks easy-to-land KO options, apart from her down aerial, which is an extremely fast meteor smash. While Samus's dair is a great edgeguarding move, especially against slow recoveries like Kirby's or Jigglypuff's, she has poor to mediocre edgeguarding ability outside of it, and her primary recovery move, the Screw Attack, travels extremely short horizontal and vertical distance, giving her a very poor vertical recovery. Her horizontal recovery, while still short and predictable, is slightly aided by her floatiness and Bombs. She is vulnerable to edgeguarding herself; an aerial Charge Shot can help perevent careless edgeguards, but her recovery is slow and predictable.

Samus is known for being the only character in Smash 64 who cannot 0-death easily, though her floatiness and Screw Attack can slightly help her escape combos. Posting a legitimate Samus combo is considered to be an inside joke in the Smash 64 community, as there are players who state that Samus has no combos and that it is virtually impossible to make a combo video of her without hacking.

Samus was nerfed in her transition to NTSC-U. Samus was overall one of the least changed characters in the NTSC-U version but one change which does hinder her is that her Grounded Screw Attack has less invincibility frames, making the move much easier to challenge and beat out. Samus was also noticeably hindered by the version's universal changes, most notably the universal increase to SDI. This notably hinders Samus due to her high amount of multi-hit attacks which are now easier to escape (including her Screw Attack). Samus was also hindered by the universal decrease to shieldstun as it makes her shield break and grab setups harder. Overall, Samus is worse than in the Japanese version.

Samus was nerfed in her transition to PAL. While she benefits from the teleport glitch covering more distance, which in turn gives her a slightly better approach option, her air speed has been reduced and her back aerial's extreme power has been toned down.

For a gallery of Samus' hitboxes, see here.

A flourish originating from Metroid that played whenever Samus got a new power-up, obtained a Power Suit upgrade, or defeated Ridley and Kraid.

For the longest time, Samus had been seen as a bottom tier character, frequently considered the worst in the whole game. The reasons for this negative perception are her lack of a reliable 0-to-death option, a slow and ineffective grab, and an overall laggy and predictable moveset. The biggest reason is that other characters have better versions of everything she has, giving players no real reason to use her competitively.

However, the perception of Samus has shifted more recently to be more positive, as she now sits in the lower-middle tier. The reasons for this shift are her floatiness granting above average survivability and some niche but highly potent kill options, particularly against high-tiered characters. Players have been utilizing these small strengths to get far better results than years previous, aiding to the more positive perception even more.

In the game's Single-player mode, Samus is fought on the Planet Zebes stage.

Samus Aran is the toughest bounty hunter in the galaxy. Using a special suit powered by the technology of the bird people which allows her to execute daring acrobatic feats, Samus pursues the airborne life form, Metroid, throughout the universe.