This article is about Donkey Kong's appearance in Super Smash Bros. For the character in other contexts, see Donkey Kong.

Donkey Kong (ドンキーコング, Donkey Kong), written as DK, is a starter character in Super Smash Bros. He has slow, yet powerful attacks, like his trademark move: the Giant Punch. Due to this, his archetype has also inspired the archetype for most of the heavyweight characters in subsequent games, in which he has also appeared. His voice clips mostly use gorilla grunts and sounds.

Donkey Kong is currently ranked 9th out of 12 on the tier list. He has powerful moves such as his aforementioned Giant Punch which when fully charged, deals 36% damage. He also sports an infamously abusable grab release, remarkable reach throughout his moveset, and is the heaviest character in the game, making him very difficult to KO, especially vertically. However, he is somewhat slow, and is also the largest character in the game, which coupled with his heavy weight makes him an easy target for combos. Despite his incredible endurance, his off-stage survivability is almost non-existent, as he has among the worst vertical-distanced recovery moves in the game. Despite this, Donkey Kong was indirectly buffed in the international releases thanks to the changes to SDI system as well as the decreased shield stun. As a result, Donkey Kong is ranked 12th in the Japanese tier list, having a losing matchup against every character in the game, especially against Kirby, which is considered to be virtually unwinnable. 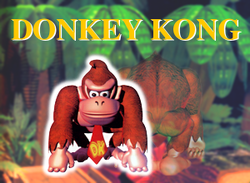 Donkey Kong is the heaviest and largest character in Super Smash Bros. This means he gets hit quite easily, and he also has a poor shield cover, making him vulnerable to shield break combos such as Yoshi's Z-canceled DJC neutral aerial performed repeatedly. However, he can take many hits and high damage before being KO'd. Like heavyweight characters in subsequent games, Donkey Kong has attacks that deal lots of damage and have strong knockback. He also has two meteor smashes (forward and down aerials), and some extremely powerful finishers, including his forward smash and Giant Punch when fully charged or close to fully charged. However, his attacks are generally slow and laggy, and most of his KOs still require setup.

Contrary to popular belief, Donkey Kong has slightly above-average dashing speed (although he does have a relatively slow air speed). Donkey Kong has a great grab and throw game due to having the longest non-tether grabbing horizontal range, terrific throw combos (especially when there are walls), and the infamous infinite throw trap that allows him to rack up damage easily and effectively. He also has a KO throw in his back throw. Donkey Kong has good reach, which allows for decent combos despite slow attack speed, but he lacks a projectile and a reliable way to deal with them, making his approach poor and unvaried. His Up B however also breaks projectiles, outside of Fox's laser.

For recovery, Donkey Kong's up special move, Spinning Kong, travels great horizontal distance, but has poor vertical gain, with no options to extend it. This makes him very vulnerable to meteor smashes. It should be noted that Donkey Kong is extremely vulnerable to combos due to being very large, very heavy, and falling somewhat quickly. It is however quite powerful for how fast it is, being a reliable get out of danger move.

In high level play, Donkey Kong is known for his incredible Spinning Kong and back throw gimps. On platforms, it is possible for DK to platform cancel up airs into Giant Punch or up smash. His Up B, Spinning Kong, is an amazing gimping move, with strong knockback as well as being able to out-prioritize every recovery in the game. It also has some invincibility (at the edge of his fists) which makes it quite useful to out-space opponents in the neutral game. Donkey Kong is a hard counter to Jigglypuff, as he can grab, forward throw, cargo release, and re-grab into a Giant Punch for a low percentage KO. With good timing, it is also possible to cancel his Down B after one hit, allowing him to combo into a forward air as well as a fully charged Giant Punch on all characters except for Falcon, Fox, and Yoshi. Donkey Kong however has problems with projectiles, and the top characters in the game (including Pikachu, Kirby, Fox, and Captain Falcon) combo him too heavily for him to rise on the tier list. His poor mobility also gives him a disadvantage against fast characters like Fox and Captain Falcon. Donkey Kong is usually considered to be among the best low tier characters in low tier tournaments due to his Giant Punch combos and the fact that there are not many projectile users in the low tiers (as well as his Up B being able to out-prioritize all of their projectiles.) In short, DK's main strategies in competitive play are gimps using throws, outspacing with Spinning Kong, Down B combos, grab combos into a meteor smash and otherwise, and up aerial chains.

Donkey Kong is also considered to be slightly better for doubles than singles, mainly because he is better at KOing as some characters are forced to approach. His great reach also helps. Another good thing is that if he has a fast partner, they will be able to easily save him from large combos. He is one of the few characters with relatively good recovery. Donkey Kong is also excellent at edgeguarding and gimping, especially on Dream Land. However, his problem matchups, especially with Kirby and Pikachu, hinder many doubles matchups.

Donkey Kong has been buffed in the NTSC-U version. Donkey Kong is heavier and his Spinning Kong grants more height, improving his endurance and recovery. His back and down aerials are also stronger making it even easier for him to close out stocks. In terms of universal changes, Donkey Kong gets adversely affected by the removal of momentum sliding however, he also benefits from the higher SDI presence, which allows him to escape combos better. As a result of these changes, he is overall better than in the Japanese version. 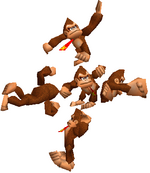 A flourish originating from Donkey Kong Country that played whenever a Kong defeated a boss or completed a bonus level.

Donkey Kong has historically been considered a low to lower-middle tier character. His major disadvantages are his large size and lack of speed make him easy to combo, which is a death sentence in this game due to the massive amount of hitstun. However, he does have a few saving graces in Spinning Kong and back air being good gimping tools as well as having the only true chain grab in the game. Players only tend to use Donkey Kong when their opponent is picking a specific character like Jigglypuff, as Donkey Kong seems to be designed specifically to counter them. Donkey Kong does fair better in doubles, as his above average K.O. potential pairs well with characters that can rack up damage but have little in the way of closing stocks like Fox and Ness.

In the game's single-player mode, the player and two randomly chosen allies will fight a Giant Donkey Kong on Congo Jungle.

Donkey Kong has the ability to use his forward throw as a means of nigh-inescapably racking up damage on characters. In order to do this, Donkey Kong must use the forward throw, but not any other throw. If the opponent escapes, they will likely still be within Donkey Kong's grab range whereupon they can be grabbed again. This throw trap can be broken if the opponent can shake towards Donkey Kong and his grab. Yoshi and Ness have the most difficulty escaping the throw trap due to their unique double jumps. Pikachu, Samus, Mario, and Luigi have the least difficulty escaping due to their up specials.

Due to Donkey Kong's laggy aerials, Donkey Kong has very little combo ability with his aerials except a down aerial or forward aerial into a throw. However, if Donkey Kong shield drops from a ledge, he can quickly use an up aerial and then Z-cancel. Donkey Kong can also jump, use an aerial, and Z-cancel on a ledge for a similar effect. As a result, on ledges, Donkey Kong can juggle characters with up aerials whom he would otherwise be unable to combo.

Down special resets and down aerial usage[edit]

Donkey Kong can also cancel the first slap of Hand Slap by moving the control stick back after the first slap, enabling him to combo it into a virtually any move to KO the majority of the cast outside of Jigglypuff. It also makes him invincible for the first 2 frames. Donkey Kong's other main KO'ing setup outside of grab-based gimps is a Down Aerial into an Up Smash or a Down Air into a Down Smash.

Donkey Kong and Mario started out as arch-rivals, but they've patched things up in recent years. These days DK spends his time searching the jungle for bananas instead of kidnapping beautiful maidens. In the past few years, other members of the Kong family have cashed in on DK's fame as well, including his favorite nephew, Diddy.